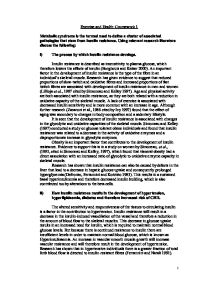 It is seen that insulin sensitivity has a negative correlation with age, but a recent study conducted by Seals et al., (1984, cited in Borghouts and Keizer, 2000) found that endurance trained elderly subjects are more insulin sensitive than young, sedentary subjects. So although age is a discriminating factor it is therefore better to be old and physically active than to be young and inactive. Evidence from epidemiological studies suggest that by increasing the frequency of exercise from under once a week to just a least once a week can result in a significant decrease in the incidence of non-insulin dependent diabetes mellitus (NIDDM). From figure 1 it is evident that the greatest fall is from this initial increase in exercise and that a further increase in frequency results in a related drop in incidence, although the fall is not as large. Figure 1 Incidence rates of NIDDM in relation to frequency of vigorous exercise. This highlights that important benefits of exercise and furthermore that the increase in exercise frequency does not have to be dramatic to produce significant effects. There have also been more in-depth, cross sectional studies that have compared athletes to non-athletes. The results have shown that the trained subjects are more insulin sensitive than untrained subjects (Borghouts and Keizer 2000) ...read more.

Evidence to confirm this, was found in a recent report by Morris, Everitt, Pollard, Chave and Semmence (1980, cited in Dishman, 1994). The report was on males who had been asked to complete a detailed record of their physical activity at the weekend, which was used to classify the men into two categories, vigorous and non-vigorous exercisers. Vigorous exercise was defined as exercise at a level equal to heavy industrial work and the study showed that 20% of the participants were classified as vigorous exercisers. The men were then followed for mortality and it was found that there were 475 deaths from coronary heart disease. It concluded that the death rate was twice as high in non-vigorous exercisers than in vigorous exercisers. To conclude it can be seen from this essay that exercise is beneficial in the improvement and prevention of insulin resistance. This is essential as it has been highlighted that many associated pathologies can stem from insulin resistance. It has also been highlighted that exercise is beneficial in the treatment of these symptoms and can therefore lead to a better way of life for insulin resistance sufferers. A final point that has been discussed is that for an improvement to take place the amount of exercise does not have to be dramatic (once a week) and so anybody can do it. ...read more.