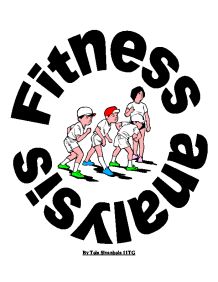 Rhona is the next fit girl in the pack. She is 0.05m shorter than Anne and weighs 5kg less. As shown on the graph, Rhona has the next low peak rate to Anne and her heart rate returned to normal quicker than Marj and Jane's. Marj is unfit. She is the heaviest of the girls and third tallest. She reached the highest peak rate of 145 of all the girls. Jane is probably the least fit girl in the group. She weighs just as much as Anne but is much shorter than her with a difference of 0.25m. She has a resting pulse of 60 but didn't return to her resting pulse after 20 minutes of concluding the exercise. Both boys and girls started off with a high pulse rate because the lines on the graph are steep. Rhona, Marj and Jane had similar results as shown by the graph. The lines are very close together and follow a similar trend. However, after all been given the same time span of 10 minutes for their pulse rates to return to normal after the exercise was terminated. It was clear that Rhona, Marj and Jane are fit respectively. ...read more.

To evaluate if the order of fitness I devised was correct, I would have the pupils participate in a series of activities which will take place at the same time, same place and under the same conditions. This will ensure that the results are reliable and can be consulted if the need arises. If the conditions are different or altered in any way, it will inevitably come to the merit of at least one of the pupils. An example is a situation where the pupils need to survive 15 minutes on a treadmill and do 25 star jumps. A pupil who does firstly 25 star jumps and then the tread mill activity will appear fitter than somebody who does firstly 15 minutes on the treadmill and then the star jumps. This is because the tread mill activity is more tiring than star jumps and doing the treadmill first will affect performance on the star jumps. I would have the pupils take part in a Fartlek. Fartlek requires the pupils to walk for a set time, jog for a set time and then sprint. This will test their speed, agility and endurance. I will also have them run a set distance to test their speed. Swimming makes a great sport for them to take part in as it will test their speed, endurance and lung capacity. Cycling will also test their endurance, agility and suppleness. ...read more.