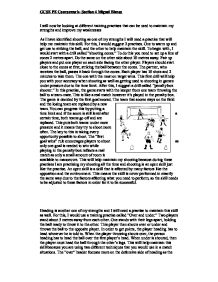 Football. I will now be looking at different training practises that can be used to maintain my strengths and improve my weaknesses penalty box soccerAs I have identified shooting as one of my strengths I will need a practise that will help me maintain t

GCSE PE Coursework- Section 4 Miguel Blanes I will now be looking at different training practises that can be used to maintain my strengths and improve my weaknesses As I have identified shooting as one of my strengths I will need a practise that will help me maintain this skill. For this, I would suggest 2 practises. One to warm up and get use to striking the ball, and the other to help maintain the skill. To begin with, I would start with a drill called "shooting cones." To do this you need to set up a line of cones 2 metres apart. Do the same on the other side about 10 metres away. Pair up players and put one player on each side facing the other player. Players should start close to the cones at first, striking the ball between the cones. The partner, who receives the ball, passes it back through the cones. Each player has 10 shots and 2 minutes to take them. The one with the most on target wins. This first drill will help you with your accuracy when shooting as well as getting used to shooting in games under pressure due to the time limit. After this, I suggest a drill called "penalty box shooter." In this practise, the game starts with the keeper from one team throwing the ball to a team-mate. ...read more.

The "under" header focuses on the attacking side as the headers need to be accurate and controlled in order to score by keeping the low, as far away from the goal keeper as possible. To improve weaknesses I will need to think of practises which contain progression so I can develop these and improve. As I identified, crossing is one of my weaknesses which I need to develop and improve. To do this I suggest a drill called "box in." Four players are needed for the practise. The first and second player both stand outside the area while the third acts as an attacker and the fourth goes in goal. The first player plays a one two with the second. Once he has received the ball from the second, he then crosses the ball into the box trying to pick out the attacker. The player crossing has to look up to see where the attacker is as well as seeing the position of the keeper. He also has to think about the type of cross he will play in order for the ball to reach the attacker. This will help to develop the skill because you are doing exactly what is needed in a match, as in a match it is important to look where players are as well as crossing the ball accurately. Once the player has mastered this, a defender or two can be added to encourage progression. ...read more.

The attacker begins with the ball and has to try and keep possession for 2 minutes. The object of the defender is to try and tackle them, preventing them from keeping possession. If the attacker keeps possession for 2 minutes, he scored 5 points, however if he is tackled the defender scores 5. In order for the defender to get extra points, he has to tackle the other player within 20 seconds. If he succeeds he gets 5 extra points, however if he fouls the attacker he loses 5 points. The person, who has the most points after three tries, wins. This will help to develop my tackling as it practises the timing of the tackle as well as the technique. If the technique is poor and he gives a foul away, points are deducted, therefore this rule helps you think about the way you will tackle the opposition in order to not commit a foul. The 20 seconds bonus also encourages the player to tackle quickly and this would further improve this skill as you have to perform it under pressure, as in a real game you don't have a lot of time to tackle someone. To add progression, more attackers can be added so they can pass to each other. This will make it harder for the defender to tackle as their will be more people trying to keep it away from him, and the 20 seconds bonus becomes virtually impossible. For further progression the 20 seconds limit and be reduce to 10. ...read more.