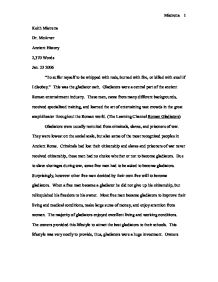 Gladiators were a central part of the ancient Roman entertainment industry

Keith Mistretta Dr. McArver Ancient History 2,370 Words Jan. 23 2006 "To suffer myself to be whipped with rods, burned with fire, or killed with steel if I disobey." This was the gladiator oath. Gladiators were a central part of the ancient Roman entertainment industry. These men, came from many different backgrounds, received specialized training, and learned the art of entertaining vast crowds in the great amphitheater throughout the Roman world. (The Learning Channel Roman Gladiators) Gladiators were usually recruited from criminals, slaves, and prisoners of war. They were lowest on the social scale, but also some of the most recognized peoples in Ancient Rome. Criminals had lost their citizenship and slaves and prisoners of war never received citizenship, these men had no choice whether or not to become gladiators. Due to slave shortages during war, some free men had to be asked to become gladiators. Surprisingly, however other free men decided by their own free will to become gladiators. When a free man became a gladiator he did not give up his citizenship, but relinquished his freedom to his owner. Most free men became gladiators to improve their living and medical conditions, make large sums of money, and enjoy attention from women. The majority of gladiators enjoyed excellent living and working conditions. The owners provided this lifestyle to attract the best gladiators to their schools. This lifestyle was very costly to provide, thus, gladiators were a huge investment. ...read more.

During the final day of The Tetrad the gladiator practiced breaking holds and preventing his challenger from holding him. (Grivetti, Applegate 7) Many other training methods were used to prepare a gladiator to fight. To increase strength, training consisted of hitting a large pole, called a palus, with a wooden sword. Each recruit would plant his own palus and use it as his own. Gladiators were taught to stab at their opponents, not to slash them. Stabbing injured major organs the fastest. Gladiators made shields from branches and swords from sticks to practice with. Weapons included the war chain, net, trident, dagger, and lasso. All of these weapons were used against the palus. Gladiators also fought in armor. They carved a large shield called the scutum, the left grieve the ocrea, the right grieve the galea, and the sword the gladius. Gladiators not only learned how to fight well, but how to make an effective killing blow. Some gladiators used spears, and practiced throwing at targets. Gladiators didn't only train for strength, but for distance and speed. Gladiators did not only train for strength, but for distance and speed. When the gladiator was about to be killed, the lanistas taught the gladiators to die with bravery and to not be afraid. Gladiators were trained to give watchers entertainment and a good time. ...read more.

The first dates were December 2nd to 8th, December 17th to 23rd, during the festival of Saturnalia, a peace festival in honor of the god Saturn. The second set of dates were March 19th to 23rd, during the festival of Quinquatrus, this was the fifth day after the Ides of March, the day of Julius Caesar's death. (Meijer 33-35) Gladiators fought in the Colosseum. The Colosseum, originally known as the Flavian Amphitheatre, was the main amphitheater in Rome. It could hold up to 50,000 seated spectators. The Colosseum's main use was holding gladiatorial combat. Construction was initiated by Emperor Vespasian and completed by his sons, Titus and Domitian, between 72 and 81 AD. (Nardo 30) Also, after about three to five years of fighting, gladiators could earn their freedom. A form of gladiator is still around today, the football player. Football players devote their lives to training and excelling, just like yesterdays gladiators. Gladiators were the athletes of their day. Although some did not have a choice, many were motivated to join their "sport." Financial results, adoration status, quality nutrition, shelter, and medical attention, and resulting independence from a job well done drove these men. They reflected the brutality and grit of their day. The gladiators took their oath seriously to the end: "To suffer myself to be whipped with rods, burned with fire, or killed with steel if I disobey." As Maximum (played by Russel Crowe, in Gladiator the movie) stated: "Death smiles at us all. All that a man can do is smile back. ...read more.