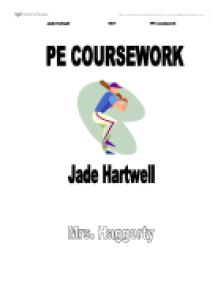 I can see that I want to improve my cardiovascular fitness. Therefore I will do a Personal Exercise Program over 6 weeks to hopefully improve this, before I do another set of tests.

Personal Details Age: 15 Weight: / Height: 1.63m Resting Heart Rate: 66bpm Max. Heart Rate: 211bpm Target Heart Rate: 60% - 126.6bpm 80% - 168.8bpm Other contributing factors affecting health: None Current activity level: Activity: Rounders Hours per week: 2 Intensity: 3 Activity: Football Hours per week: 1 Intensity: 3 Activity: Walking Hours per week: 2 Intensity: 1 I consider myself to be level 7. Health Related Fitness Cardiovascular Fitness (Aerobic Fitness) This is the ability to exercise the entire body for long periods of time. Muscular Strength This is the amount of force a muscle can exert against a resistance. Flexibility This is the range of movement possible at a joint. Muscular Endurance This is the ability to use voluntary muscles, many times without getting tired. Body Composition This is the percentage of body weight which is fat, muscle and bone. For Rounders, it would be important to have cardiovascular fitness as Rounders games often last for quite a long period of time. Also Flexibility would be important for trying to catch the ball, as it is unlikely to be hit straight at you. The player may need to move or stretch to reach it. ...read more.

Week Three: On week three I did the workout from week one but with a higher intensity (shorter breaks in between runs). This was more challenging and I found it harder to do than the first week, suggesting I didn't improve as much as I thought I would do. Week Four: In week four I repeated week two's workout, except I made it more intense by skipping for a longer time. Also the aerobic workout and dance mat workout got longer which made it much harder. It was a fun workout albeit an intense one. Week Five: This was my final week of running around the track. I found it quite difficult as I had set the intensity too high. I found it hard to complete the training session. The aerobic/dance mat workouts were quite difficult as well; with the workout time almost double what it was originally. Week Six: The skipping and hurdles were hard to do this week, but mainly the skipping. I found it less intense than the running though which surprised me. The aerobic/dance mat workouts were difficult again this week. If I did it again I would definitely reduce the duration of both workouts. ...read more.

I found that there was too much overload in my PEP, meaning (as I have mentioned above) that I couldn't complete some of the exercises. Finally I found that my PEP could have improved other areas, not just cardiovascular fitness (stamina). This is suggested by some of the test results I gained second time round which had improved such as the bar test, a test of strength. Training could have improved several areas of my fitness or possibly my mental fitness and endurance so this was why I improved several of my marks. This means that my PEP could potentially be used as a cross training method for people who are trying to improve several areas. This would be a distinct advantage. In conclusion I found that my PEP was very beneficial to my fitness as it improved my stamina which is shown by my test result. Unfortunately it was too intense and did mean that I struggled in some of the sessions towards the end of my PEP (weeks 5, 6). This meant it had a lot of overload, which although is good in principle made it too hard to complete some of the exercises. Overall I found my PEP enjoyable which is important so that interest isn't lost. ?? ?? ?? ?? Jade Hartwell 10HT PE Coursework ...read more.