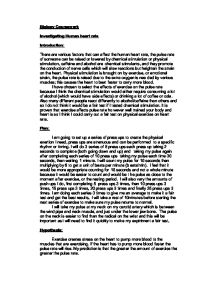 Biology Coursework Investigating Human heart rate Introduction: There are various factors that can affect the human heart rate, the pulse rate of someone can be raised or lowered by chemical stimulation or physical stimulation, caffeine and alcohol are chemical stimulants, and they promote the conduction of nerve cells which will slow reactions but heighten the strain on the heart. Physical stimulation is brought on by exercise, or emotional strain, the pulse rate is raised due to the extra oxygen is needed by various muscles; this causes the heart to beat faster to carry more blood. I have chosen to select the effects of exercise on the pulse rate because I think the chemical stimulation would either require consuming a lot of alcohol (which would have side effects) or drinking a lot of coffee or cola. Also many different people react differently to alcohol/caffeine than others and so I do not think it would be a fair test if I tested chemical stimulation. It is proven that exercise affects pulse rate however well trained your body and heart is so I think I could carry out a fair test on physical exercise on heart rate. ...read more.

My prediction is that the greater the amount of exercise the greater the pulse rate." I have proved this hypothesis. When the body is exercising the muscles respire to produce energy, so the muscles can contract. Oxygen is needed for this process; the oxygen is carried in the haemoglobin of the red blood cell. The heart and lungs need to work harder in order to get a greater amount of oxygen to the muscles for respiration. When muscles use oxygen in order to respire the process is called aerobic respiration: Glucose + Oxygen --> Carbon Dioxide + Water 6C 12H 6O + 6O --> 6CO + 6H O The heart rate rises because during exercise, cell respiration in the muscles increases, so the level of carbon dioxide in the blood rises. Carbon dioxide is slightly acid; the brain detects the rising acidity in the blood, the brain then sends a signal through the nervous system to the lungs to breathe faster and deeper. Gaseous exchange in the lungs increases allowing more oxygen into the circulatory system and removing more carbon dioxide. The brain then sends a signal to the heart to make the heart beat faster. As a result the heart rate would rise. ...read more.