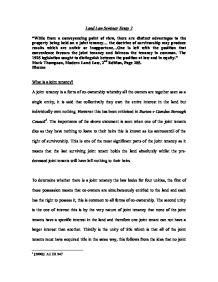 Land Law Seminar Essay 2 "While from a conveyancing point of view, there are distinct advantages to the property being held on a joint tenancy... the doctrine of survivorship may produce results which are unfair or inopportune...One is left with the position that convenience favours the joint tenancy and fairness the tenancy in common. The 1925 legislation sought to distinguish between the position at law and in equity." Mark Thompson, Modern Land Law, 2nd Edition, Page 285. Discuss What is a joint tenancy? A joint tenancy is a form of co-ownership whereby all the owners are together seen as a single entity, it is said that collectively they own the entire interest in the land but individually own nothing. However this has been criticised in Burton v Camden Borough Council1. The importance of the above statement is seen when one of the joint tenants dies as they have nothing to leave to their heirs this is known as ius accrescendi of the right of survivorship. This is one of the most significant parts of the joint tenancy as it means that the last surviving joint tenant holds the land absolutely whilst the pre-deceased joint tenants will have left nothing to their heirs. ...read more.