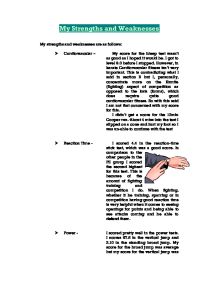 My Strengths and Weaknesses - P.E.

My Strengths and Weaknesses My strengths and weaknesses are as follows: > Cardiovascular - My score for the bleep test wasn't as good as I hoped it would be. I got to level 9.0 before I stopped. However, in karate Cardiovascular fitness isn't very important. This is contradicting what I said in section B but I, personally, concentrate more on the Kumite (fighting) aspect of competition as opposed to the kata (forms), which does require quite good cardiovascular fitness. So with this said I am not that concerned with my score for this. I didn't get a score for the 12min Cooper run. About 4 mins into the test I slipped on a cone and hurt my foot so I was un-able to continue with the test > Reaction Time - I scored 4.4 in the reaction-time stick test, which was a good score. In comparison to the other people in the PE group I scored the second highest for this test. ...read more.

> Agility - I was quite happy with my score for this test. I completed the circuit in 17.05 seconds. Agility is important for fighting to help the performer avoid attacks or set them self up to attempt an attack. I felt that this test wasn't an appropriate one to test my agility. I thought that it is a good test for a football, rugby of basketball player who has to change direction while running but for karate agility is needed from bouncing on the spot so if there was another type of agility test then I think that I would have scored even higher. > Strength - I Had a score of 54.5 in the handgrip dynamometer test, which was the highest in the group. The only reason I think that I scored quite highly in this is because in karate Fists are closed tightly most of the time. ...read more.

Didn't Do * 12min Cooper Run > Speed - I scored average with the test for speed. Iran the 30meters in 7.03 seconds. This surprised me because although speed is important in karate, we do not do any running as with football or rugby so I was really pleased with my result. The same thing applies here as with the agility test. If there were a test, which would measure the speed of the legs or arms when punching or kicking, then I would have a very high score. In training we have in the past done an exercise where one person has to kick a pad, that is held at head height, 20 times as fast as they can. I have been able to complete the 20 kicks in 9 seconds. Below Average Average Above Average * Bleep Test * Stork Stand * Beam Hang * Illinois Agility * Trunk Hyperextention * 3x10m Sprints * Standing Broad Jump * Reaction time Stick test * Vertical Jump * Hand Grip * Sit-ups * Press-ups * Juggling * Sit & Reach ...read more.