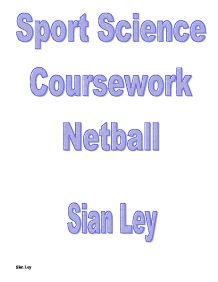 For my course work I will be coaching netball. About Netball Netball is a fast skilful team game based on running, jumping, throwing and catching. Teams may consist of up to 12 players but only seven players may be on the court at one time, the extra players will be used if one of the players on court are injured or to tired. The aim of the game is to get the ball in the opposing goal ting as many times as possible throughout a match. The court is split by two lines that divide the court into thirds. At both ends of the court there is a shooting semicircle and a 10ft goal post with no back board. Each player has a playing position determined by the areas of the court where they may move. The playing positions are; Goal shooter (GS), Goal Attack (GA), Wing Attack (WA), Centre (C), Wing defence (WD), Goal Defence (GD), Goal Keeper (GK) Position responsibilities GS Her main job is to score goals and to work in and around the circle with the GA. She must be able to react quickly to things such as rebounds of the ring and quick passes into the circle. GA She is also allowed to shoot and must work closely with the GS to feed balls into the shooting area. WA Her job is to create as many shooting opportunities as possible. She has to have solid passing with a range of passes into the shooting area. C To take the Centre Pass and support the defence and attack. She must be swift and have sharp, quick movements. One of her main roles is to get the ball from the defending area through to the attacking area. She must be quick and have a good range of passing. WD Her responsibility is to stop the ball getting to the oppositions shooting area. ...read more.

If I was to do the sessions again I would work on this, even if it was just for one session, I feel they could improve this and make their game even better. I was disappointed to see that none of the girls regularly shouted for the ball or signalled with their hands to where they wanted to receive the ball, this may have been because they didn't know how to signal or some don't fully understand. I think their mini match and regular matches in general would benefit from them learning this and also using their voice more to shout for the ball. If I was to do the course work all over again I would do some things differently, and coach the girls more skills, to get the best outcome from them for their game. I think that my planning went well. Watching the girls really helped me to determine what I was going to put into my sessions and what I was going work on with them. By being able to see their weaknesses meant that I could plan my sessions around that instead of working on parts of their game that didn't need to be improved. In my implementation I think that the theory of what I planned was good. It was planned around the team's problem areas and would in theory build on them as the weeks progressed. I do however think that I could have fitted different skills into my sessions by taking out some of the games or drills that focused on getting free in the last couple of sessions. Such as the sprint dodge, as the main points behind that drill were covered in the session 3 while learning about centre pass techniques. Also I could have planned an extra session and spread out the sessions a bit more as some are cramped ma not have given the girls enough time to take in all the skills. ...read more.