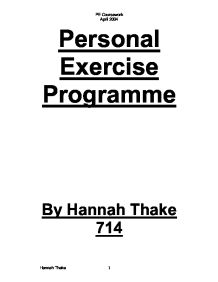 Personal Exercise Programme By Hannah Thake 714 PE course profile The sport that I wish to train for during this time is the 100 metre sprint. I gave up this sport 3 years ago due to an injury and never got round to going back. I am currently 17 years old at 1.7m, I am between an endomorph and metamorph in build, and I wish to replace fat with muscle to balance body composition. At the beginning of he summer season I hope to have improved my fitness levels so I am able to compete in competitions again. As I was part of a club called the Colchester Harriers I would wish to rejoin this club. My personal best time was 12.11 when I was 13. I suspect that it has either stayed the same or decreased, so I hope that with the help of my personal exercise plan I will get back into shape and to competition level again. When I was in training, I was training at the club for 3 times a week for 1 hour and would do my own training practice as well, so that I was training for about 5 hours per week. Now, however, I don't really do not do much exercise apart from kick boxing for1 hour a week, so I would say that I have gone through reversal and am not at such a high level as fitness as I once was. As I'm no longer training for that specific sport I will describe my old training programme. Winter and summer time training differed as the Garrison could not be used in wet and icy conditions; so after September the coaches hired out Charter Hall twice a week and in the summer we were at the Garrison 3 times a week. I would not train as often at home because of the weather in winter. ...read more.

If I were to repeat this programme I would make it have a lot more exercises based on short bursts of speed and power and having more skill related workout stations, which relate more to the 100 metres, which would have more effect on speed and power and less effect on muscular endurance. I do not need a lot of this because the 100 metres sprint is all about power and speed, and being able to run at maximal speed without tiring. I should have done some weight work for my legs to increase power by working at 80% of my 1 rep max and done low repetitions. The training I did was suitable for my age as because I may not be fully grown yet, I did not use heavy weights; instead I kept the weight low and did a high amount of repetitions, which did not damage any ligaments etc. For my gender, I think that this workout would be suitable for either a male or a female although males may need to have heavier weights. My pep would not be suitable for the general public unless their aims were the same as mine as I don't believe that this type of work would benefit people trying to lose weight or increase cardiovascular fitness. This workout would be suitable for someone competing in the 100 metres or the hurdles or even the 200 metres, if they were to increase the amount they run. This pep could be transferred across some other sports if they wanted to increase speed and power. This workout may be appropriate for a weight lifter as the point is to lift from the legs and power is needed, even though they would have to change the speed work with weight work in the gym as this workout was designed for the 100 metres and specifically for me and my needs. PE Coursework April 2004 Hannah Thake 1 ...read more.