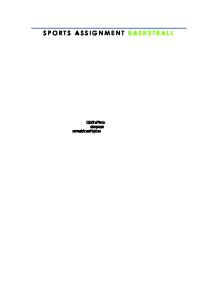 SPORTS ASSIGNMENT BASKETBALL History Compared to many other sports whose origins stem from several centuries ago, basketball is relatively new. Its origins come from a man named James Naismith. He is known as the inventor of basketball. In his legacy, he left many diaries and interviews that explain how and when he created the sport of basketball. Being from the state of Massachusetts, the climate was cold during the winter. The people there demanded for a game that could be played indoors, where it was warm. This is when Naismith stepped in. Naismith was originally born in Canada, he took schooling in Eastern Canada, but ended up dropping out in 1890. He moved to Massachusetts where he became a teacher. It is at the International Young Men's Christian Association Training School that he invented basketball. In 1891, the first basketball game took place. James Naismith had finished deciding on the rules of basketball and created a new game. The first games used a soccer ball and a basket. In the early days of basketball, a helper that sits on the side of court would climb sets of stairs to retrieve the ball from the basket. Later, an idea to cut a hole on the bottom of the peach basket arose. It was only in 1906 that nets, boards, and a metal hoop was introduced. ...read more.

game o Pushing, elbowing, shoving, tripping, and kicking results in fouls - Technical fouls include o Taking too many time-outs, using bad language, bad sportsmanship, hanging onto basket, traveling and double dribbling. - After a foul, one of two things happen: the opposing team gains the ball, or the fouled player shoots free throws - Time violations include: 3 seconds in the lane, 5 seconds in possession of the ball, 5 seconds on an inbound play and 10 seconds in the backcourt with the basketball. Equipment Basketball does not require much equipment to play. 29" circumference basketball, size modifiable 18" cylinder attached to backboard, positioned 10 feet off the ground Playing surface A typical gymnasium with markings is suitable for basketball. Typical court is 74' long by 42' wide The court has markings such as: baseline, center circle, free throw line, midcourt line, sidelines. Here are some explanations of the baselines. * Baseline - Also called the end line. This line extends across both ends of the court behind the baskets. * Center Circle - The circular area at midcourt where jump balls take place. * End Line - Also called the baseline. This line extends across both ends of the court behind the baskets. * Free Throw Line - The line 15 feet from the backboard and parallel to the end line from which players shoot free-throws. ...read more.

Famous Basketball Players Michael Jordan Michael Jordan is considered a legacy of basketball. He was born in 17 February 1963. His career in athletics started with basketball, baseball and football. In his 10th grade of school, he could not make a position in his varsity basketball team due to his height. This did not let him down. He eventually became the greatest basketball player in his time through much effort. He won the title "Air Jordan" thanks to his extraordinary leaping abilities. Even after his retirement from basketball, he remains one of the highest figures of basketball in the world. Wilt Chamberlain When he was very young, he was not a basketball fanatic. He viewed basketball as a game for sissies. His view changed when basketball became very popular in Philadelphia. He stands at 7'1", giving him an ultimate advantage in basketball. He is known for his physical strength and ability to block shots. He holds many NBA all-time records. His legacy remained as one of the most dominant players of basketball after his death in 1999. Kareem Abdul-Jabbar Ever since he was young, he showed an interest in basketball. He was an only child, brought up Roman Catholic. He soon rose to the top, being enlisted in NBA during 1969 and 1989. In this time, he scored 38,387 points-the highest score made by any player in the NBA. He won one of the six MVP awards. He retired, but his legacy as a basketball player went on, especially for his well-known Skyhook shot. ...read more.