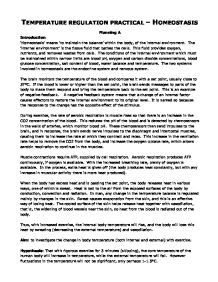 TEMPERATURE REGULATION PRACTICAL - HOMEOSTASIS Planning A Introduction 'Homeostasis' means 'to maintain the balance' within the body, of the internal environment. The 'internal environment' is the tissue fluid that bathes the cells. This fluid provides oxygen, nutrients, and removes wastes from cells. The conditions of the internal environment which must be maintained within narrow limits are blood pH, oxygen and carbon dioxide concentrations, blood glucose concentration, salt content of blood, water balance and temperature. The two systems involved in homeostasis are the endocrine system and nervous system. The brain monitors the temperature of the blood and compares it with a set point, usually close to 37�C. If the blood is lower or higher than the set point, the brain sends messages to parts of the body to make them respond and bring the temperature back to the set point. This is an example of negative feedback. A negative feedback system means that a change of an internal factor causes effectors to restore the internal environment to its original level. It is named so because the response to the change has the opposite effect of the stimulus. During exercise, the rate of aerobic respiration is muscle rises so that there is an increase in the CO2 concentration of the blood. ...read more.

The internal temperature was measured by placing the digital thermometer under the arm of the subject. The external temperature was measured by fixing the strip thermometer around the forehead of the subject. The readings were taken. 2. The subject then skipped for as much as she could, for 3 minutes. This was considered to be rigorous exercise. 3. After 3 minutes, the temperatures were taken again, and results recorded. The temperatures were taken using the same thermometers, measuring from the same place (i.e. if the initial temperature was taken from the left armpit, then the temperature after was also taken from the left armpit). The initial temperatures were taken in the lab, so to keep this factor constant, the temperatures after exercise were also taken in the lab. 4. This was repeated, so that each subject exercised twice, with a break in between. Whilst the first person was resting, the partner did rigorous exercise, and the person resting kept time on the stopwatch. Thus, there was a break of approximately 4 minutes between exercise periods (to allow time for reading and recording of results). All skipping took place in the corridor outside the laboratory, a controlled environment. ...read more.

This supports the hypothesis that the original temperatures would be restored. Conclusion Results from this experiment on the whole support my hypothesis, with the exception of one anomaly in the data. It can be seen that the internal temperature rises after rigorous exercise (on average, the internal body temperatures rose by 0.413�C), and the external temperature falls after rigorous exercise (on average, the external body temperature fell by 2.5�C). My estimates as to how much the temperatures would fluctuate were erroneous; any temperature rise was never more than 1�C, and the fall in external temperature was much more than 1.5�C. In this respect, part of my hypothesis was not supported. Evaluation We should have measured the temperature of the environment in which we were exercising and taking temperatures to make sure that the environment was not affecting the readings or changing significantly (we would have hardly noticed because of changes in our internal temperature - it would have just been seen as generally 'cold' and so we cannot feel slight changes). Each reading should have been taken twice to make sure that each temperature taken was accurate. However, taking extra readings would not be as useful because the body temperature may change between the readings. But this would still ensure greater accuracy in the data collected. Perhaps the average of two consecutive readings can be used. ...read more.