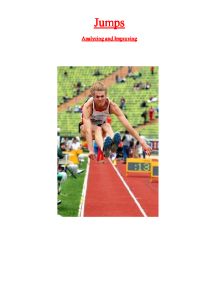 The first step will be to identify Adamsweaknesses and strengths in Long Jump and Triple Jump.

Jumps Analyzing and Improving First Step The first step will be to identify Adams weaknesses and strengths in Long Jump and Triple Jump. Adam has a good physical fitness as he endures in other sports such as football and cross country. As a result of his good fitness I have decided not to work on the physical aspect of Jumping, but the technical aspect as I think Adams technique lacks. Adams jumps are un-technical and he relies a lot on his speed and strength to pull him through. The second step will be target setting, identifying and analyzing the problem. Adams personal best in Long Jump is 5.00m and his personal best in Triple Jump is 10.90 m. We both wish to improve these distances greatly over this six week program. To do this we will use much resource such as books, internet and one to one talking with each other. Adams training sessions will consist of: * Plyometrics * Sprint Posture Work * Technical Sessions Each of these sessions will take place once a week for 6 weeks. To see if Adam has improved I will first test Adam with three jumps in both Long Jump and Triple Jump to see his potential at this moment in time and at the end of the six weeks I will then test him again to see if he has improved. The whole six week training course will be applying to the SPOR and FITT factors. SPOR * Specific - The work we are doing is very specific to jumps and only jumps as plyometrics is gaining "spring". * Progression - Progression will come in the later stages of the program as I am building him up for the last testing session, this is called "Peaking". * Overload - I will be training Adam very hard and all the information I will be giving him will overload his mind with many things, how he will improve is if he processes this information. ...read more.

We will start with the basic drills e.g. high knees, and bum flicks, then move onto skipping, pumping and marching, then finally moving onto light sprinting at 90% with good posture. Feedback: Adams response to the work was extremely good as I underestimated his potential in Plyometrics. The Plyometrics involves timing and rhythm which I thought Adam did not have in the last session due to his poor phases in the Triple Jump. But after close analysis I found out that he only has problems with his timing and rhythm when he is jumping at speed. As he is coming down the runway he is concentrating on his sprinting and not what he is going to do when he jumps. I decided I wouldn't tell him about this until we did the sprinting drills so I could change this then. He Jumped well in the Plyometrics and surprised me with his "spring" and strength that he must have gained from football. Before the second half of the session I discussed with Adam the problem with his timing and rhythm, as I identified this he realised what he was doing and became more aware of the problem. This is what I had hoped to achieve by telling him. We started the Sprint session and I had told him to apply what I had said into his running, he did this by keeping relaxed. I could see this change in his sprinting as when he ran before his cheek and facial muscles were extremely tense. Now when he sprinted his facial muscles were a lot more relaxed. I had also got him to use his arms better as he was only using around 30% of his arms potential. I changed this by applying no movement from the wrist or the elbow, but only in the shoulder. When he did this his arms were rising further back and further forwards keeping a right angle at the elbow. ...read more.