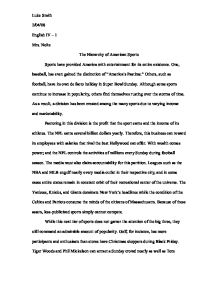 The Hierarchy of American Sports

The Hierarchy of American Sports Sports have provided America with entertainment for its entire existence. One, baseball, has even gained the distinction of "America's Pastime." Others, such as football, have its own de facto holiday in Super Bowl Sunday. Although some sports continue to increase in popularity, others find themselves rusting over the storms of time. As a result, a division has been created among the many sports due to varying income and marketability. Factoring in this division is the profit that the sport earns and the income of its athletes. The NFL earns several billion dollars yearly. Therefore, this business can reward its employees with salaries that rival the best Hollywood can offer. With wealth comes power; and the NFL controls the activities of millions every Sunday during football season. ...read more.

While this next tier of sports does not garner the attention of the big three, they still command an admirable amount of popularity. Golf, for instance, has more participants and enthusiasts than stores have Christmas shoppers during Black Friday. Tiger Woods and Phil Mickelson can attract a Sunday crowd nearly as well as Tom Brady and Peyton Manning. NASCAR, one of the more fast-paced and exciting sports America has to offer, owns an ever-growing popularity that may one day overthrow a prominent member of the monarchy. Quickly ascending into stardom, the UFC is another sport enjoying a great deal of popularity. The UFC, or Ultimate Fighting Championship, threatens to replace boxing as America's most brutally entertaining sport. ...read more.

It appears that the new generation of consumers finds these sources of entertainment archaic. The iconic figures that every sport needs have disappeared for these sports in the present day. With no identifiable face an enthusiast has no one to cheer for or against. The intimacy that attracts a fan has dwindled tremendously. The popularity that these sports once enjoyed finds itself in its waning moments because of its inability to maintain the income, icons, and intimacy that the consumers of this generation demand. American sports have created their own hierarchy over time through profit and popularity differential. While the trio has maintained their sovereignty, the subordinate levels continue to jostle for position with the eldest tier losing this brawl. Regardless of structural changes, this nation will always reserve a place for activities of recreation. ?? ?? ?? ?? Luke Smith 2/04/08 English IV - 1 Mrs. Nolte ...read more.