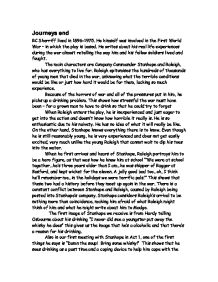 RC Sherriff lived in 1896-1975. He himself was involved in the First World War – in which the play is based. He writes about his real life experiences during the war almost retelling the way him and his fellow soldiers lived and fought.

The main characters are Company Commander Stanhope and Raleigh, who has everything to live for. Raleigh epitomises the hundreds of thousands of young men that died in the war, unknowing what the terrible conditions would be like or just how hard it would be for them, lacking so much experience.

Because of the horrors of war and all of the pressures put in him, he picks up a drinking problem. This shows how stressful the war must have been – for a grown man to have to drink so that he could try to forget

When Raleigh enters the play, he is inexperienced and just eager to get into the action and doesn’t know how horrible it really is. He is so enthusiastic due to his naivety. He has no idea of what it will really be like. On the other hand, Stanhope knows everything there is to know. Even though he is still reasonably young, he is very experienced and does not get easily excited, very much unlike the young Raleigh that cannot wait to dip his toes into the water.

When he first arrives and hears of Stanhope, Raleigh portrays him to be a hero figure, as that was how he knew him at school “’We were at school together…he’s three years older than I am…he was skipper of Rugger at Basford, and kept wicket for the eleven. A jolly good bad too…oh, I think he’ll remember me…in the holidays we were terrific pals.”’ This shows that these two had a history before they meet up again in the war. There is a constant conflict between Stanhope and Raleigh, caused by Raleigh being posted into Stanhope’s company. Stanhope considers Raleigh’s arrival to be nothing more than coincidence, making him afraid of what Raleigh might think of him and what he might write about him to Madge.

The first image of Stanhope we receive is from Hardy telling Osbourne about his drinking “I never did see a youngster put away the whisky he does” this gives us the image that he’s a alcoholic and that there’s a reason for his drinking.

Also in our first meeting with Stanhope in Act 1, one of the first things he says is “Damn the soup!  Bring some whisky!”  This shows that he sees drinking as a past time and a coping device to help him cope with the war.  When we hear of Stanhope’s drinking and the three years he’s been on duty we feel sorry for him & see his drinking as a way of escaping from the horrors of the war.

This contrasts a lot with Raleigh who doesn’t really want to drink, but just does it to impress everyone else, he hasn’t been posted for a very long time like all the other soldiers there as he’s fresh out of university.