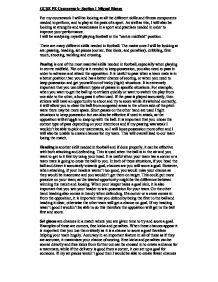 will be looking at all the different skills and fitness components needed to perform, and to play at the peak of a sport. As well as this, I will also be looking at strengths and weaknesses in a sport and practises needed in order to improve your performa

GCSE PE Coursework- Section 1 Miguel Blanes For my coursework I will be looking at all the different skills and fitness components needed to perform, and to play at the peak of a sport. As well as this, I will also be looking at strengths and weaknesses in a sport and practises needed in order to improve your performance. I will be analysing myself playing football in the "centre midfield" position. There are many different skills needed in football. The mains ones I will be looking at are: passing, heading, set pieces (corner, free kicks, and penalties), dribbling, first touch, shooting, tackling and crossing. Passing is one of the most essential skills needed in football, especially when playing in centre midfield. Not only is it needed to keep possession, you also need to pass in order to advance and attack the opposition. It is useful to pass when a team mate is in a better position than you and has a better chance of scoring, or when you need to keep possession and get yourself out of tricky (tight) situations. It is extremely important that you use different types of passes in specific situations. For example, when you want to get the ball up to strikers quickly or want to switch the play from one side to the other, a long pass it often used. If the pass is played accurately, then strikers will have an opportunity to shoot and try to score while if switched correctly, it will allow you to clear the ball from congested areas to the others side of the pitch were there may be more space. Short passes on the other hand are used I tight situations to keep possession but can also be effective if used in attack, as the opposition will struggle to keep up with the ball. It is important that you chose the correct type of pass depending on your intentions and if my passing was weak I wouldn't be able to pick out teammates, so I will loose possession more often and I will also be unable to create chances for my team. ...read more.

Good stamina also allows you to attack more often. As your muscles have oxygen being delivered to them efficiently, it means you can create more for your team, as you will still be able to pass, dribble and shoot well, as your performance is not affected, due to the lack of stamina therefore you have more opportunities in the game to score. If you didn't have good cardio-vascular endurance you would not be able to last the whole match and you would get tired during games, meaning you wouldn't be able to perform at your best near the end of games. Muscular endurance is the ability of your muscles to maintain and repeat contractions without tiring. For a centre midfielder is it particularly important as it is a position where you need to work the hardest. A player with good muscular endurance will be able to keep running, they will be able to create chances near the end of the games where most of the opponents may be tired therefore consequently less able to deal with it. If your muscular endurance wasn't good, then your muscles would get tired and you won't be able to make as many runs as usual. This would mean you won't be able to help your team in attack as you wouldn't be able to run to get to the ball as much. The result of this would be your teammates having fewer options in attack as you are not available to support them. This could lead to the chance being wasted, as they may need your assistance in order to score. In defence, you wouldn't be able to keep up with your opponent therefore he may score as a result. Strength is the force that muscles exert when they contract. This is an important fitness component to have as it will allow you to keep opponents at bay while running with the ball meaning you are less likely to be tackled. ...read more.

If someone wasn't flexible, they wouldn't be able to reach the ball when coming to them from an awkward position therefore they would lose possession. They would also get injured easily when falling, as their joints wouldn't be able to cope with the movement. Power is a combination of strength and speed. It is the ability to transfer energy swiftly into force. This is important as a centre midfielder as you need to be able to power through the opposition when you have the ball. The midfield area is often very congested, meaning you need to have good power in order to dodge the tackles and not get tackled yourself and lose possession. Power is also important when it comes to passing and shooting. When passing, your pass needs to be powerful enough to beat the opponent as well as it reaching the desired teammate. When shooting, by having powerful shoots, it means you have more chance of scoring if the shot is on target, as the ball would travel faster and the opposition goal keeper will have less time to reach it. If someone didn't have power, they wouldn't be able to drive forward with the ball; therefore they will not be able to avoid the challenges coming from the other team leading to them losing the ball a lot of the time. They would also lose a lot of the ball, as there passes would never reach their teammate due to the lack of power. This would allow the other team to take advantage as if you give the ball away to them, they can create chances and score themselves. The lack of power would also mean their shots would be easily saved, as they would take a long time in order for it to get to the goal. This gives the goalkeeper the maximum chance to save it as he would have a long time to adjust his position to the direction of the ball. This lack of power would mean you wouldn't score as many goals in games which could mean you lose the match as a result. ...read more.