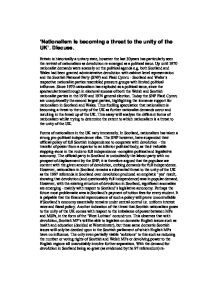 'Nationalism is becoming a threat to the unity of the UK'. Discuss. Britain is historically a unitary state, however the last 30years has particularly seen the revival of nationalism as devolution re-emerged as a political issue. Up until 1970 nationalist demands were scarcely on the political agenda e.g. both Scotland and Wales had been granted administrative devolution with cabinet level representation and the Scottish National Party (SNP) and Plaid Cymru - Scotland and Wales's respective nationalist parties resembled pressure groups with limited political influence. Since 1970 nationalism has exploded as a political issue, since the spectacular breakthrough in electoral success of both the Welsh and Scottish nationalist parties in the 1970 and 1974 general election. Today the SNP Plaid Cymru are unequivocally the second largest parties, highlighting the immense support for nationalism in Scotland and Wales. Thus fuelling speculation that nationalism is becoming a threat to the unity of the UK as further nationalist demands occur and resulting in the break up of the UK. This essay will analyse the different forms of nationalism whilst trying to determine the extent to which nationalism is a threat to the unity of the UK. ...read more.

The only even partially viable 'solutions' to this such as reducing the number or voting rights of Scottish and Welsh MPs or devolving power to the English regions all unavoidably involve further separatism. With the demand for devolution in Scotland being so great (as evidenced by the 97 referendum) re-centralising power is merely not a politically acceptable option so further division via autonomy will become the outcome, thus an eventual break up of the UK. Wales is perhaps the least place, likely to cause a break up of the UK. Wales, unlike Scotland or Northern Ireland is geographically much closer to England and historically much more comprehensively absorbed e.g. it was formally incorporated into England back in 1536 and unlike Scotland or Northern Ireland, Wales shares its legal, criminal justice and education system with England. Therefore nationalism in Wales mainly takes a cultural / patriotic form i.e. preserving the dominant use of the Welsh language. It is therefore the official Plaid Cymru policy - not to campaign for political independence but merely for greater devolution to combat the vast 'Englishing' process of Wales. ...read more.

the Good Friday Agreement of 98, which faced enormous criticism and succeeded in turning a generally historic bi-partisan issue in British politics, to somewhat of a policy fault line. However, the obduracy and inability to compromise for peace over the whole nationalism issue in Ireland is nothing new. It has existed for at least 50years with still no independent Ireland but extreme terrorist acts strewn all across the years. Therefore with the most developments in the Northern Ireland peace process i.e. the most recent Good Friday Agreement of April 1998, which saw a unique agreement with Britain, the Unionists and the Nationalists, remains generally on track so it is qualified to predict that a break up the UK via Ireland is not an immediate prospect. However, an accurate long-term prediction about Ireland is unattainable. In conclusion, there has been an overall unequivocal and unprecedented surge in nationalist demands in Scotland, Wales and Northern Ireland. But there is no evidence that it threatens the current unity of the UK. However, with the inimitable rise of English nationalism and significant unacceptable anomalies with the present situation, it is clear that in th ...read more.