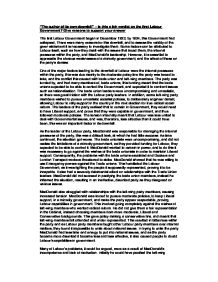 &amp;#147;The author of its own downfall&amp;#148; &amp;#150; Is this a fair verdict on the first Labour Government? Givereasons to support your answer.

"The author of its own downfall" - Is this a fair verdict on the first Labour Government? Give reasons to support your answer The first Labour Government began in December 1923; by 1924, this Government had collapsed, There were many reasons for this downfall, and to assess the validity of the given statement it is necessary to investigate them. Some factors can be attributed to Labour itself, such as how they dealt with the issues that faced them, the internal pressures within the party, and MacDonald's leadership. However, it is essential to appreciate the obvious weaknesses of a minority government, and the effect of these on the party's demise. One of the major factors leading to the downfall of Labour were the internal pressures within the party, this was due mainly to the moderate policy line the party was forced to take, and the conflict this caused with trade union and left-wing members. The party was funded by, and had many members of, trade unions, this funding meant that the trade unions expected to be able to control the Government, and expected it to confront issues such as nationalisation. The trade union leaders were uncompromising and unrealistic, so there was great friction with the Labour party leaders. In addition, some left-wing party members wished to pursue unrealistic socialist policies, to deliberately engineer defeat, allowing Labour to rally support in the country in the next election for true radical social reform. ...read more.

Some historians would argue that by this stage he had lost all motivation to continue, he was tired with the continual struggle of trying to unite his own party, and deal with governmental issues, and wanted to leave office. This would explain his irrational decisions, although, they could just have been as a result of inexperience. MacDonald made a few serious mistakes and these were very damaging for the Labour party, there are several proposed theories as to why he made them, but it is possible that the pressure had become too much, and he wanted to leave power. It is important to remember that Labour were not completely ineffective as a party, they did have some successes both domestically and internationally. Generally, they were not particularly radical, and achieved little more than previous Governments. Domestically, they made a few changes, such as Wheatley's Housing Act, in which grants were given to local authorities to build council houses, (to relieve the housing shortages,) and the old age pension and unemployment benefits were increased. Also, more state education was provided. Although these things were good, they were undermined by the problems in the country. People expected Labour to be radically socialist, and make big changes, both members of the electorate, and Labour party members, were disappointed by how little was actually achieved. However, some historians would argue that since Labour needed to gain an image of respectability, more radical changes were impossible. ...read more.

As a minority government, Labour was weak, and so the many events, which led to increased association with Communism, were very damaging, undermining Labour's power and support. Labour had been unpopular from the very start, and this forced to take a moderate line in policies. This divided the Labour party. The struggle of trying to bring the party together, and keep the support of the trade unions, combined with the difficult domestic problems, would have been almost impossible for any political leader. Perhaps a stronger leader than MacDonald, faced with fewer problems within the party, might have just managed to survive this time by minimising fear of Communism and dealing more sensitively and diplomatically with events such as the Campbell case. However, MacDonald lacked the necessary experience, skills and strength as a leader, the pressures put on him were immense, he made several costly mistakes, which is not surprising considering the pressure he was under. In some respects, it could be argued that Labour brought about its own downfall, certainly, MacDonald could have dealt better with the situations he found himself in. However, as a minority government, in an unfortunate situation from the very start they were destined to fall, and it is unlikely that attempts by MacDonald would have done anything more than delay when the party fell. It was little more than an apprenticeship to power, and the Conservatives knew that Labour were not a great threat, and thus, tactically allowed them to have control, knowing that they would fall. ...read more.