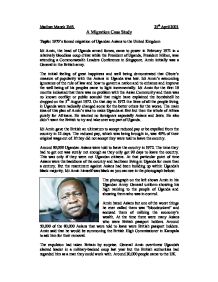 1970's forced migration of Ugandan Asians to the United Kingdom.

Madhav Manek 3M6 25th April 2003 A Migration Case Study Topic: 1970's forced migration of Ugandan Asians to the United Kingdom Idi Amin, the head of Uganda armed forces, came to power in February 1971 in a relatively bloodless coup d'�tat while the President of Uganda, President Milton, was attending a Commonwealth Leaders Conference in Singapore. Amin initially was a General in the British army. The initial feeling of great happiness and well being demonstrated that Obote's measure of popularity with the Asians in Uganda was low. Idi Amin's astounding ignorance of the rule of law and how to govern a nation and to enhance and improve the well being of his peoples came to light incrementally. Idi Amin for the first 18 months indicated that there was no problem with the Asian Community and there was no known conflict or public scandal that might have explained the bombshell he dropped on the 5th August 1972. On that day in 1972 the lives of all the people living in Uganda were radically changed some for the better others for the worse. ...read more.

But the resentment against Asians had been building up within Uganda's black majority. Idi Amin himself was black as you can see in the photograph below: The photograph on the left shows Amin in his Ugandan Army General uniform showing his high ranking to the people of Uganda and showing them who was in control. Amin hated Asians but one of the worst things he ever called them was "bloodsuckers" and accused them of milking the economy's wealth. At the time there were many Asians who were British passport holders. Around 50,000 of the 80,000 Asians that were told to leave were British passport holders. Amin said that he would be summoning the British High Commissioner in Kampala to ask him for their removal. The expulsion had taken Britain by surprise. General Amin overthrew Uganda's elected leader in a military-backed coup last year but the British authorities had regarded him as a man they could work with. Around 30,000 people came to the UK. ...read more.

The Government feared that so many refugees would be a huge drain on British state benefits and tried to persuade General Amin to phase their expulsion instead of giving them 90 days' notice to leave. But Sir Alec Douglas-Home, the Foreign Secretary, told the Cabinet that the Ugandan dictator was becomingly increasingly unpredictable and that there was "little prospect of establishing rational communication with him". Idi Amin wanted Africa for Africans. If he could not do this for the whole of Africa he at least wanted it for Uganda. This was possible at the time because he was in charge. He changed the lives of many Asians who lived in Uganda. At the time many if not all would have thought that their lives were ruined but nowadays the people living in Britain have decent jobs with decent pay. This is enough to keep their families going. Many people may be doing better here than they might've been doing in Uganda had the expulsion not taken place. In the long term I think that the Ugandan Asians migration has worked out for the better. The photograph above shows the first Asians arriving from Uganda at Stansted Airport. ...read more.