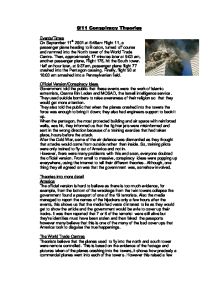 9/11 Conspiracy Theories Events/Times On September 11th 2001 at 8:46am Flight 11, a passenger plane heading to Boston, turned off course and rammed into the North tower of the World Trade Centre. Then, approximately 17 minutes later at 9:03 am, another passenger plane, Flight 175, hit the South tower. Half an hour later, at 9:37am, passenger plane flight 77 crashed into the Pentagon causing. Finally, flight 93 at 10:03 am smashed into a Pennsylvanian field. Official Version/Conspiracy Ideas Government told the public that these events were the work of Islamic extremists, Osama Bin Laden and MOSAD, the Israeli intelligence service. They used suicide bombers to raise awareness of their religion so that they would get more attention. They also told the public that when the planes crashed into the towers the force was enough to bring it down; they also had engineers support to back it up. When the pentagon, the most protected building and air space with reinforced walls, was hit, they informed us that the fighter jets were misinformed and sent in the wrong direction because of a training exercise that had taken place, hours before the attack. ...read more.

This is what some theorists believed happened, there were internal explosives on the steel frame which helped the towers fall down in the accurate vertical drop that they did. The Pentagon Theorists question how the most protected building and defended air space with reinforced walls was hit by a commercial plane leaving only a small hole. There are some theories that suggest it had internal explosives like the towers, others suggests that it was a missile as there was not much debris from the plane. Also the hole that was left was not very big and it was too perfect. Some question, why wasn't the Pentagon protected? If it is the most protected building in the USA, how did a big commercial plane smash into it, where was the air support? Eyewitness's say they saw clearly the plane crash into the pentagon, however some wonder if they have vested interest and that they were either bribed or blackmailed by the government, although it might have been coincidental that they were there at that time. The circumstantial evidence would be weakened because although there was photos and video footage, these can be digitally changed to the governments needs. ...read more.

Many eyewitnesses saw the planes crash into all the buildings. Expertise is used to weaken their credibility as the engineers say that the crashes were enough to make the towers fall down in that way and also to make the little wreckage for the planes. They also have photographers and their photos which weakens it, although these can be digitally changed. On the other hand some of the other theories don't work and this can be very upsetting to the relatives of their loved ones who died. For example, the theory those suggests that all of the people on board flight 93 and 77 did not actually die but are off in another country with a different identity and with the aeroplanes dumped in the Atlantic ocean, the government can lay false trails. This has weakens all the theories as it could be that all the theorists are lying so that they make famous for their wacky and sometimes upsetting ideas. Altogether I think that the government were somehow involved one way or another and went to great lengths to cover up what really happened. This is one of the biggest mistakes as now most people are suspicious and do not trust them. This is when theories are made. ...read more.