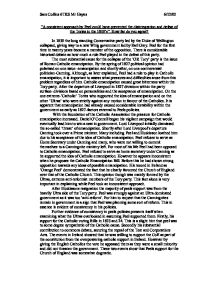 &quot;A consistent approach by Peel could have prevented the disintegration and defeat of the Tories in the 1830's&quot;. How far do you agree?

"A consistent approach by Peel could have prevented the disintegration and defeat of the Tories in the 1830's". How far do you agree? In 1830 the long standing Conservative party led by the Duke of Wellington collapsed, giving way to a new Whig government led by Earl Grey. Peel for the first time in twenty years became a member of the opposition. There is considerable historical debate as how much a role Peel played in the defeat of this party. The most substantial cause for the collapse of the 'Old Tory' party is the issue of Roman Catholic emancipation. By the spring of 1827 political opinion had polarised on one issue- emancipation and shortly after, on one controversial politician-Canning. Although, as later explained, Peel had a role to play in Catholic emancipation, it is important to assess what pressures and difficulties arose from this problem regardless of him. Catholic emancipation caused great bitterness within the Tory party. After the departure of Liverpool in 1827 divisions within the party surface- divisions based on personalities and the acceptance of emancipation. On the one extreme-'Catholic' Tories who supported the idea of emancipation and on the other 'Ultras' who were strictly against any motion in favour of the Catholics. ...read more.

Secondly his substantial contribution to commons debate, securing the repeal of the Test and Corporations Acts. The events in Ireland showed that he was willing to support the CoE as part of the constitution from the overpowering catholic support in Ireland. However by giving the English Catholics the vote he appeased them as they were a small minority and did not threaten the government. These two events show that Peels support for the Church of England was somewhat dogmatic. As the support for emancipation rapidly increased Wellington had two choices. Either he could pass a Catholic Emancipation Act and let O'Connell take his seat or he could declare the election null and void. Here he ran the risk of violence in Ireland, and possible civil war. Wellington did want to avoid bloodshed. Peel himself realised that an Irish revolt was close at hand so he began preparing the emancipation bill. He did however introduce measured to insure Irish peasants could not stand for election. The possible revolt was out of Peels hands. His responsibility now, was to act in such a way that would protect Britain and its interests. In all respect we can see that Peel, in essence had no choice but to put forward the Emancipation Bill, if not just to avoid revolution in Ireland, but to protect the English constitution. ...read more.

In conclusion it is clearly evident that a consistent approach by peel could not have prevented the collapse of the Tory Party. If he had followed a consistent approach and failed to act on the possible threat of revolution in Ireland it is most likely that the government would have collapsed anyway. Many of the problems were out of Peels hands. He was under extreme pressure to do what was right for Britain, and at the basic level he did this, not only by preventing revolution but by making England stronger as a nation. The issue of parliamentary reform especially was one that Peel had no chance of controlling. In essence Catholic emancipation was like a time bomb to the Tory party, waiting to be triggered (by O'Connell's actions). Therefore the collapse of the Tory party was orientated around a huge combination of external factors and the issue of emancipation that happened to explode in the period of 1830. It is unfair to say that Peel could have prevented this. Even if he had acted it is quite possible that the situation would have escalated considerably more. And this would not have been could for the tory party at all. As can be seen by Peels inconsistent approach. Sam Collins 6TKS Mr Hayes 6/12/02 ...read more.