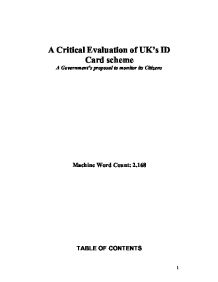 A Critical Evaluation of UK's ID Card scheme A Government's proposal to monitor its Citizens Machine Word Count: 2.168 TABLE OF CONTENTS 1. INTRODUCTION 3 2. AN OUTDATED TOOL FOR A NEW KIND OF WAR 3 3. THE ID CARD BILL 4 4. POLITICAL CONFLICT 4 5. THE CATALYIST FOR THE CARDS INTRODUCTION 5 5.1 THE TERRORIST THREAT 5 5.2 IDENTITY THEFT / CRIME 6 5.3 ILLEGAL IMMIGRATION 6 6. THE TECHNOLOGY ON THE CARD 6 7. OPPOSITION TO THE CARD 7 8. THE COST OF THE CARD'S INTRODUCTION 7 9. CONCLUSION AND RECCOMMENDATIONS 8 10. BIBLIOGRAPHY AND REFERENCES 9 11. APPENDIX 10 1. INTRODUCTION This commissioned report aims to hopefully provide the reader with an up to date analysis of the UK Governments ongoing proposal to introduce a national ID card for all UK citizens, from the perspective an independent management consultant. The word 'hopefully' has been used rather optimistically, due to the ever evolving developments concerning this issue, which are changing and unfolding even as this report is being written. Therefore, any temporal inaccuracies regarding recent developments either not covered or addressed in this report from the date of its publication, would gratefully be acknowledged as being absent solely for this reason. The report will look at the ID card bill itself, the proposed data to be included on the card, the technology used to store and read that data, in addition to the costs involved for the country and importantly for the individual. The controversial issues of human rights and civil liberty violations associated with the introduction of the card will also be addressed, explained and attempted to be presented in an unbiased fashion throughout. 2. AND OUTDATED TOOL FOR A NEW KIND OF WAR? As a concept, the ID card is not a new one for UK citizens, although with all the controversy and differences of opinion regarding the current version's introduction, one could easily be excused for thinking that this is the first time such a scheme had been considered for implementation. ...read more.

These advances are highly efficient and effective. "Biometrics can provide a greater degree of security than traditional authentication methods". [11] It has been learned that a small handheld device used by Police officers will be used to perform these verification tests, crosschecking the biological identity via the National Identity database. However some quarters claim that the level of sophistication the proposed version of this system is not 100% reliable, the European Union points out that "All 10 fingers and thumbs are needed to ensure reliable identification, and reduce the number of false positives".[8] However it is unlikely that this state of the art version will be used in the UK due its high cost, and consequently a system which will only hold fingerprints will be used instead. 7. OPPOSITION TO THE CARD This most contentious of bills, has continued to divide the public, the politicians and a number of pressure groups alike "In response to a parliamentary question from MP Anne McIntosh, Home Office minister Beverley Hughes has confirmed that over 5,000 of the 7,000 responses to a public consultation on the issue were against the scheme." [5] Of the many groups that oppose the introduction of the card for a number of reasons, the Civil Liberties Group 'Liberty' appear to have the had loudest voice in highlighting the negative aspects of the card's introduction to the British people via the media. Shami Chakrabarti (Liberty's Director) states that "No positive vision of society was ever built upon compulsory identity cards" [9] and goes on to suggest that the disadvantages associated with the card, by far outweigh the benefits. Many of the opposing views are firmly centred around the suggestion that an ID card would be a violation of human rights, concerning an individual's fundamental right to walk freely, proudly and unchallenged within the UK, to have to carry and/or produce such a document in order to justify their status regardless of whether or not they have breeched UK law or not. ...read more.