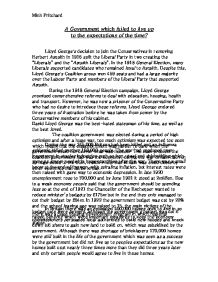 A Government which failed to live up to the expectations of the time? Lloyd George.

A Government which failed to live up to the expectations of the time? Lloyd George's decision to join the Conservatives in removing Herbert Asquith in 1916 split the Liberal Party in two creating the "Liberals" and the "Asquith Liberals". In the 1918 General Election, many Liberals supported candidates who remained loyal to Asquith. Despite this, Lloyd George's Coalition group won 459 seats and had a large majority over the Labour Party and members of the Liberal Party that supported Asquith. During the 1918 General Election campaign, Lloyd George promised comprehensive reforms to deal with education, housing, health and transport. However, he was now a prisoner of the Conservative Party who had no desire to introduce these reforms. Lloyd George endured three years of frustration before he was taken from power by the Conservative members of his cabinet. David Lloyd George was the best-hated statesman of his time, as well as the best loved. The coalition government was elected during a period of high optimism and after a huge war, too much optimism was expected too soon which meant that the disappointment was harder to bare when the government could not deliver what was needed. ...read more.

In Britain there was an estimated 400,000 homes unfit to live in so there was a huge housing development program in which regional commissioners persuaded local authorities to build new houses and knock down old slums to gain new land to build on, which was subsidized by the government. Although there was shortage of bricklayers 170,000 homes were still built in the life of the government which was seen as a success by the government but did not live up to peoples expectations as the new homes built cost nearly three times more than they did three years later and only certain people would agree to live in those homes. Industrial relations were weakened when Lloyd George refused to nationalise coal mines. In 1919 he set up the "Sankey Commission" to stop a national miners' strike. Nationalisation was not politically good, so Lloyd George made Mines and the railways privatised. In 1921 a strike of railwaymen, miners and transport workers looked inevitable but when Lloyd George intervened personally he managed to calm tensions down, in the end it was only miners that went on strike. ...read more.

Chanak did Lloyd George and the coalition much harm, his pro-Greek policy offended many conservatives who supported the Turks, but more importantly Lloyd George seem reckless in risking another war just four years after World War One when everyone was still very weary about war. Lloyd George's coalition was heavily criticised, I think that the government failed to fulfil its election promises, but conditions in Britain after the war were not very good. All countries from the war suffered greatly and I think that there were more successes made by the coalition government that what is usually said about it, it is probably harder to find successes in peace time government than in a wartime government. The coalition lasted longer than any one thought; Lloyd George had so many problems which he tried to sort out but was probably inevitable that he would not be able to sort all of them out. Lloyd George resigned as Prime Minister in 1922 and never served in government again, although he was leader of the Liberals from 1926-1931. During that time, support for the Liberals in the country dwindled and the Labour party had taken over from the Liberals as the party of opposition to the Conservatives. Minh Pritchard ...read more.