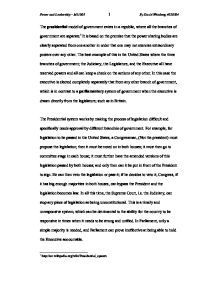 A new democracy will face many difficulties in deciding its new Governmental structure.

The presidential model of government exists in a republic, where all the branches of government are separate.1 It is based on the premise that the power sharing bodies are clearly separated from one another in order that one may not exercise extraordinary powers over any other. The best example of this is the United States where the three branches of government; the Judiciary, the Legislature, and the Executive all have reserved powers and all can keep a check on the actions of any other. In this case the executive is elected completely separately that from any other branch of government, which is in contrast to a parliamentary system of government when the executive is drawn directly from the legislature; such as in Britain. The Presidential system works by making the process of legislation difficult and specifically needs approval by different branches of government. For example, for legislation to be passed in the United States, a Congressman, (Not the president) must propose the legislation; then it must be voted on in both houses; it must then go to committee stage in each house; it must further have the amended versions of this legislation passed by both houses; and only then can it be put in front of the President to sign. He can then veto the legislation or pass it; if he decides to veto it, Congress, if it has big enough majorities in both houses, can bypass the President and the legislation becomes law. In all this time, the Supreme Court, i.e. the Judiciary, can stop any piece of legislation as being unconstitutional. ...read more.

One problem which is normally glossed over is that the President is a 'winner take all contest', i.e. there is no ability to split the executive like there is Congress. The office therefore cannot become a coalition, because in a Parliamentary system when a party wins on a slim majority, it must rely on others, who the public would also see as fit to run the country to come to policy decisions collectively. Thus, a President, can in effect be in control of his reserved powers, (such as the power to grant pardons) without constraint, which can be worrying to certain members or groups in society. The parliamentary system would have to be sensitive to the greater plethora of views which the house holds in order to make certain decisions otherwise it will not get a majority and thus will be liable to a vote of no confidence. What this can however prevent is the ability for extremists to get into power. In most Parliamentary systems, the electoral system is a Proportional Representation one in which the vote more naturally reflects minorities in society. This can lead to extremist parties getting into Parliament and then being able to steer legislation to unfair or even racist ends. This touches on another problem the Presidential system suffers from. It is very difficult to remove the President from office. In the United States, the President has to be formally impeached by the House of Representatives, which requires a two-thirds majority of its members. ...read more.

to the Government, thus the President must rely on their support and especially their funding in a way that is not experienced in Parliamentary systems. It can therefore be argued that the expense spared in the bureaucracy means that the Government must source other areas of capital and thus loses some of its democracy in letting un-elected officials to have a say in legislation. In conclusion, a new democracy will face many difficulties in deciding its new Governmental structure, and a lot will depend on the previous administration and especially the history of the country.8 A Presidential system, although with its stable leadership and its greater democratic nature, is susceptible to outside influences such as big pressure groups and the inability to remove the leadership provide serious issues for the public to consider. Whereas in a Parliamentary system, personnel are easily moved around and the passage of legislation is clearly much easier to get through in times of crisis; although, like in the UK, a second chamber can sometimes not provide a good enough separation of powers and thus may lead to an over-powerful Prime Minister. What is important is consider the previous history, and in a country where authoritarian leaders have characterised its past, a Presidential system may not be so wise, whereas a country which has had a lot of ineffective coalitions through semi-democracies, may see a single head of state as preferable. 1 http://en.wikipedia.org/wiki/Presidential_system 2 P. 270 Hague and Harrop Comparative Government and Politics 3 http://en.wikipedia.org/wiki/Presidential_system#Parliament_versus_Congress 4 http://dictionary.reference.com/search?q=lame%20duck 5 http://www.whitehouse.gov/history/presidents/gw1.html 6 P.273 Hague and Harrop Comparative Government and Politics 7 http://.cepr.org/press/DP2051PR. ...read more.