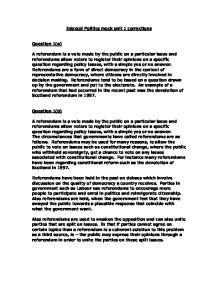 A referendum is a vote made by the public on a particular issue and referendums allow voters to register their opinions on a specific question regarding policy issues, with a simple yes or no answer.

To become an MP, the candidate must obtain more votes than any other candidate but not necessarily a majority ie - the MP does not need more than 50% of the vote. The party with the largest number of MPs goes to form the government. The supplementary vote system is a majority system with a one member constituency and this system is used to elect the London Mayor. The way in which it works is as follows. Voters have two preference votes in that they cross their first and second choices on the ballot paper. If a candidate receives more than 50% of first preferences then they are elected. If no candidate gets over 50% then the top two remain in competition and the second preference votes for these two from the eliminated candidates are re-distributed until a winner emerges. The single transferable system is a proportional system and it gives rise to multi-member constituencies. This system is adopted in Northern Ireland. The manner in which it works is that parties have as many candidate as they like and voters are allowed to rank the candidates in order of preference, seats are allocated on the basis of a "quota system". ...read more.