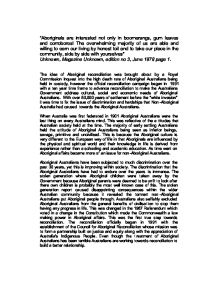 &quot;Aboriginals are interested not only in boomerangs, gum leaves and corrobores! The overwhelming majority of us are able and willing to earn our living by honest toil and to take our place in the community, side by side with yourselves&quot;

What we worry, what we got in our mind, what we got in our heart. We think from our grandfathers, we think from our father and from our mother. It is Still in my heart." (appendix 2) taken from his handing over speech. Bridges have been crossed for Aboriginal Australians and progress has been made especially in the field of reconciliation. Reconciliation has dramatically improved the attitudes of Non-Aboriginal Australians since the official campaign beginning in 1991 through education and general support for movements within the community. The government's policies for educating school students about Aboriginal language and way of life have been a huge progression as the youth are the face of the future and a more reconciled Australia. These attitudes however differ from older generations still continuing to be against a treaty or apology. Reconciliation is a path which has been followed to a certain extent yet in order to become a stable, definite motion for the future there must be more education and campaigning towards building a better relationship with Australia's Indigenous society. ...read more.