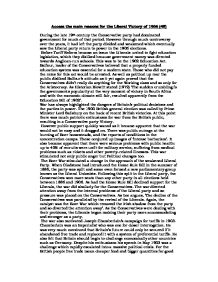 Access the main reasons for the Liberal Victory of 1906 (45)

Access the main reasons for the Liberal Victory of 1906 (45) During the late 19th century the Conservative party had dominated government for much of that period. However through much controversy over the years, it had left the party divided and weakened which eventually saw the Liberal party return to power in the 1906 elections. Before Tariff Reform became an issue the Liberals united to fight education legislation, which they disliked because government money was directed towards Anglican-run schools. This was to be the 1902 Education Act. Balfour, leader of the Conservatives believed that a properly funded education system was essential for a modern state. Those who did not pay the rates for this act would be arrested. As well as political up roar the public disliked Balfour's attitude as it yet again proved that the Conservatives didn't really do anything for the Working class and so only for the Aristocracy. As Historian Blewitt stated (1972) 'The sudden crumbling fo the governments popularity at the very moment of victory in South Africa and with the economic climate still fair, resulted apparently from the Education Bill of 1902'. War has always highlighted the dangers of Britain's political decisions and the parties in power. ...read more.

He was very much convinced that Britain's future could only be secured if it abandoned free trade and replaced it with a system of preferential tariffs. He also felt that Britain should begin to challenge economically other countries such as Germany. Despite his enthusiasm his speech in May 1903 was a challenge which rapidly escalated into a massive political crisis. For the British people free trade mean cheaper food and bigger quantities for good value. Many feared that there would be dearer food which in itself proved to be a swing against the Conservatives of devastating proportions. Despite the fear within the poorer society, tariff reform helped unite the Liberal Party behind free trade ( an issue they all agreed on ) and so as well as Liberals joining force so too did it attract some Conservatives, notably Winston Churchill, to defect to the Liberals. Many joined because the issue had split the Conservative party into three main groups: the whole-hoggers, who accepted tariff, reform completely, the free-fooders, who supported free trade and the Balfourites, who favoured the compromise of accepting limited tariff reform. The impact of this policy again promised more support for the Liberal Party. ...read more.

The Government saw the effectiveness of banning strikes and this clearly upset the workers as it deprived them of value means of protest against poor working conditions and inadequate pay. Taff Vale sued to restrain any action may obstruct business and for damages already caused. The workers felt that Balfour was behind the decision but they were wrong this was the most damaging to Balfour and his party and with the rapid rise of the Trade unions it was only a matter of time for them to turn against the conservatives. Following the Taff Vale dispute a small party was formed which implored itself to the Working class. It was known as the Labour Party. In 1903 the Lib-Lab electoral pact was drawn up. This pact divided constituencies between the two parties and prevented their fighting each other to split a vote and allow the Conservatives the opportunity of winning. In the 1906 General election, the pact helped swing many seats in south Lancashire and Liverpool away from the Conservatives. The consequence of public and political uproar over so many decisions the Conservatives made the end result of the 1906 General Election - the Liberal Party's landslide victory - when the Conservatives lost 246 Members of Parliament, leaving it with 156, and the Liberals gained 216 to give it 399. ...read more.