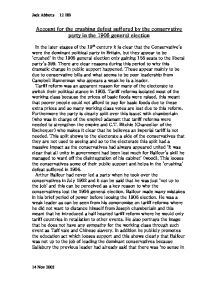 Account for the crushing defeat suffered by the conservative party in the 1906 general election.

Account for the crushing defeat suffered by the conservative party in the 1906 general election In the later stages of the 19th century it is clear that the Conservative's were the dominant political party in Britain, but they appear to be 'crushed' in the 1906 general election only gaining 156 seats to the liberal party's 399. There are clear reasons during this period to why this dramatic change in public support happened. These appear mainly to be due to conservative bills and what seems to be poor leadership from Campbell Bannerman who appears a weak he is a leader. Tariff reform was an apparent reason for many of the electorate to switch their political stance in 1903. Tariff reforms isolated most of the working class because the prices of basic foods were raised, this meant that poorer people could not afford to pay for basic foods due to these extra prices and so many working class votes are lost due to this reform. Furthermore the party is clearly split over this issue; with chamberlain (who was in charge of the empire) adamant that tariff reforms were needed to strengthen the empire and C.T. Ritchie (Chancellor of the Exchequer) ...read more.

to catholic schools and so they were forced into changing their political stance. The 1902 education act also annoyed upper classes because they believed poorer people didn't need a good education in Latin etc, Middle classes because they believed that the schools should not be teaching so many classics (Latin) but also that they should be teaching sciences. By loosing support from these three sections of the electorate it shows that the 1902 education act was a failure and it contributed to the defeat suffered by the conservatives. The foreign policies adopted by Balfour collided with the slow change in the public's opinion of the Great British Empire. British people's opinion had changed from a very pro empire to a more liberal view off anti empire by 1906, Whereas Balfour wanted it strengthened. The Boer war is an example of the conservative's attempts to strengthen the empire and bring more wealth into Britain. Initially it was very popular with the electorate and helped win a landslide victory in 1900, The Boer war did bring to light poverty in Britain as 2/3 of volunteers for the war were rejected because they were malnourished, This meant that British people began to wonder how so many people were living in poverty if Britain was such a prosperous country. ...read more.