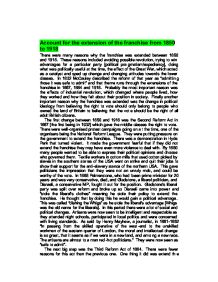 Account for the extension of the franchise from 1850 to 1918

Account for the extension of the franchise from 1850 to 1918 There were many reasons why the franchise was extended between 1850 and 1918. These reasons included avoiding possible revolution, trying to win advantages for a particular party [political pragmatism/expediency], doing what was politically useful at the time, the effect of the Great War, which acted as a catalyst and sped up change and changing attitudes towards the lower classes. In 1832 McCauley described the reform of that year as "admitting those it was safe to admit" and that theme runs through the extensions of the franchise in 1867, 1884 and 1918. Probably the most important reason was the effects of industrial revolution, which changed where people lived, how they worked and how they felt about their position in society. Finally another important reason why the franchise was extended was the change in political ideology from believing the right to vote should only belong to people who owned the land of Britain to believing that the vote should be the right of all adult British citizens. ...read more.

Artisans were now seen to be intelligent and respectable as they attended night schools, participated in local politics and were concerned with living standards. As said by Henry Mayhew, a journalist, in 1861-1862 "In passing from the skilled operative of the west-end to the unskilled workmen of the eastern quarter of London, the moral and intellectual change is so great, that it seems as if we were in a new land, and among a new race. The artisans are almost to a man red-hot politicians." They were now seen as "safe to admit". The next big step was the Third Reform Act of 1884. There were fewer reasons for this act than the previous one. One thing it did was extend the Second Reform Act to include people in the countryside as well as the towns. In relation to this act, Gladstone, who was by now prime minister, is quoted as saying "Is there any doubt that the peasantry of this country are capable citizens". ...read more.

This was so that the government would be seen as fair as they had forced people to go to war for the country so they could at least have the vote as a reward. Also very few men would be eligible to vote as they would have been away from their homes for years, thereby rendering the property qualification rule [which meant voters had to have lived in the same place for a certain amount of time before the election] useless. There were four overarching reasons that the franchise was extended: political expediency, fear and pressure, changing ideologies and social and political change. I think that in the 1867 reform act pressure and fear were the main factors due to the Hyde Park riots and pressure from the National Reform League. In 1884 the main reason for the extension of the franchise was also fear as they were trying to thwart the rising popularity of socialism in Britain. The main reason for the representation of the people act was the Great War, which would come under social and political change as it rendered some laws useless and left almost no soldiers with the right to vote. ...read more.