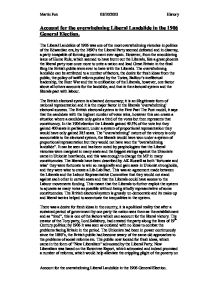 Account for the overwhelming Liberal Landslide in the 1906 General Election.

Account for the overwhelming Liberal Landslide in the 1906 General Election. The Liberal Landslide of 1906 was one of the most overwhelming victories in politics of the Edwardian era, by the 1890's the Liberal Party seemed defeated and in disarray, a party incapable of forming government ever again. However, from the smouldering issue of Home Rule, which seemed to have burnt out the Liberals, like a great phoenix the liberal party rose once more to unite a nation and lead Great Britain in the final fling the British public were ever to have with the Liberals. The overwhelming landslide can be attributed to a number of factors, the desire for fresh ideas from the public, the policy of tariff reform pushed by the Tories, Balfour's ineffectual leadership, the Boer War and the re-unification of the Liberals, however, one factor above all others accounts for the landslide, and that is the electoral system and the liberals pact with labour. The British electoral system is a bastard democracy; it is an illegitimate form of national representation and it is the major factor in the liberals 'overwhelming' electoral success. The British electoral system is the First Past The Post model, it says that the candidate with the highest number of ...read more.

The thirst for new ideas drove to an increased popularity for the liberals; however, the overwhelming nature of the landslide victory was due to the electoral system. The policy of tariff reform was a devastatingly divisive issue and rejuvenated the Liberal Party, the continuation of this policy lead to a popularisation of the Liberal Party and led to disenchantment with Unionism and its ideals. The Tariff Reforms were the "brain child" of Joseph Chamberlain; it set out the ideals of an economic protectionist system, which would spearhead "Imperial Preference", and the taxation of foreign goods. This was one of the only issues, which would truly unite a devastated Liberal Party; it hit at the heart of Liberalism, which at its very core was the idea of Free Trade. The idea also split the Tory party who were not truly behind the idea of the Tariffs, it also caused great unease in the country as people still believed the Liberal mantra of Free Trade was the most effective and which was going to bring economic prosperity. Some feared that the price of bread would rise because there was a viscous campaign by the liberals with the slogan "No Stomach Tax", some feared retaliatory tariffs on British goods. ...read more.

They were united over the issue of Balfour's Education Act which had enraged non-conformists who despised paying for Anglican and Catholic education, non-conformists were the backbone of the liberal party and if they were enraged then the party was sure to sit up and take notice. The issue of Tariff Reform attacked the Liberals sacred value of Free Trade, the Unionists had hit a nerve and the Liberal party moved to unite the country behind their view of a world of Free Trade with out barriers to economic trade expansion. The Rowntree Report helped to unite the Liberals behind the banner of poverty relief, the Liberals unification was a significant factor in their rise to popularity but it was the electoral system which produced the Liberals with their overwhelming landslide. In Conclusion, the overwhelming Liberal landslide in the 1906 general election was due to the electoral system in Britain at the time and still persists today, the landslide gained by the liberals is not wholly representative of the gains they made, which were marginal, but marginal in enough places so as to give them the largest majority ever gained by the Liberal Party. Martin Fox 03/10/2003 History Account for the overwhelming Liberal Landslide in the 1906 General Election. ...read more.