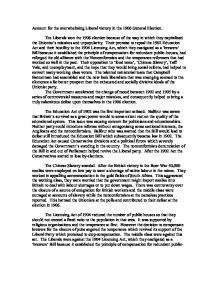 Account for the overwhelming Liberal victory in the 1906 General Election.

Account for the overwhelming Liberal victory in the 1906 General Election. The Liberals won the 1906 election because of the way in which they capitalised the Unionist's mistakes and unpopularity. Their promise to repeal the 1902 Education Act and their hostility to the 1904 Licensing Act, which they castigated as a 'brewers' Bill because it established the principle of compensation for redundant public-houses, had reforged the old alliance with the Nonconformists and the temperance reformers that had worked so well in the past. Their opposition to 'food taxes', 'Chinese Slavery', Taff Vale, and unemployment, and the hope that they would bring social reform, had helped to convert many working class voters. The talented ministerial team that Campbell Bannerman had assembled and the new look liberalism that was emerging seemed to the electorate a far better prospect than the exhausted and socially divisive ideals of the Unionist party. ...read more.

The Chinese Slavery scandal. After the British victory in the Boer War 50,000 coolies were employed on low pay to meet a shortage of native labour in the mines. They worked in appalling accommodation in the gold fields of South Africa. This aggravated the working class, they were worried that the government might import coolies into Britain to deal with labour shortages or to put down wages. There was controversy over the closure of a source of emigration for British workers and the middle class were outraged at accounts of slavery while the nonconformists at the nameless practices reported. This harmed the Unionists at the polls and contributed to their defeat at the election in 1906. The Licensing Act of 1904 reduced the number of public houses so that they should not exceed a fixed ratio to the population in that area. ...read more.

Chamberlain had lost his middle class audience. This destroyed the unity of the Conservative and Unionist Party and ensured its defeat in the 1906 election. The Boer War resulted in a decline in imperialist fervour because of the methods used to gain victory in the Boers. The use of concentration camps to imprison wives and children for instance lost support for the Conservatives and contributed to their defeat at the 1906 election. The failure of the government to reduce the high level of unemployment between 1904 and 1905 resulted in the Liberals election victory in 1906. It still believed in the Poor Law. A new scheme was proposed to deal with unemployment in London. The scheme proved inadequate and there were hunger marches and demonstrations by the unemployed. Another Bill was introduced, the Unemployed Workmen Bill. This too failed. These failures widened the breach between the Unionist party and the labouring classes. ...read more.