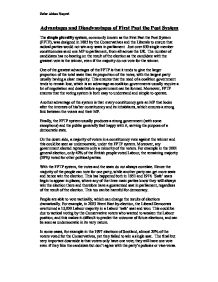 Advantages and Disadvantages of First Past the Post System.

Advantages and Disadvantages of First Past the Post System The simple plurality system, commonly known as the First Past the Post System (FPTP), was designed in 1885 by the Conservatives and the Liberals to ensure that radical parties would not win any seats in parliament. Just over 650 single member constituencies send one MP to parliament, from all across the UK. The number of candidates has no bearing on the result of the election as the candidate with the greatest vote is the winner, even if the majority do not vote for the winner. One of the greatest advantages of the FPTP is that it tends to give the larger proportion of the total seats than its proportion of the votes, with the largest party usually having a clear majority. ...read more.

Finally, the FPTP system usually produces a strong government (with some exceptions) and the public generally feel happy with it, serving the purpose of a democratic state. On the down side, a majority of voters in a constituency vote against the winner and this could be seen as undemocratic, under the FPTP system. Moreover, any government elected represents only a minority of the voters. For example in the 2001 general election, only 42% of the British people voted Labour, the remaining majority (58%) voted for other political parties. With the FPTP system, the votes and the seats do not always correlate. Hence the majority of the people can vote for one party, while another party can get more seats and hence win the election. ...read more.

People are able to vote tactically, which can change the results of elections dramatically. For example, in 2003 Brent East by-election, the Liberal Democrats overturned a 13,000 Labour majority in a Labour 'safe' seat and won. This could be due to tactical voting by the Conservative voters who wanted to weaken the Labour position, and this makes it difficult to predict the outcome of future elections, and can be seen as undemocratic in its very nature. In some cases, for example in the 1997 elections of Scotland, almost 20% of the voters voted for the Conservatives, yet they failed to win a single seat. The final but very important downside is that voters only have one vote; they still have one vote even if they like the candidate but don't agree with the party's policies or vice-versa. Zafar Abbas Naquvi ...read more.