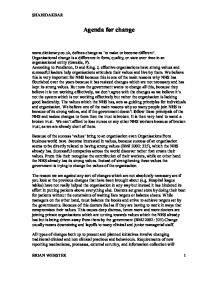 Agenda for change www.dictionary.co.uk, defines change as 'to make or become different'. Organisational change is a difference in form, quality, or state over time in an organisational entity (Garside, P). According to Pendleton, D and King, J, effective organisations have strong values and successful leaders help organisations articulate their values and live by them. We believe this is very important for NHS because this is one of the main reasons why NHS has flourished over the years because it has resisted changes which are not necessary and has kept its strong values. But now the government wants to change all this, because they believe it is not working effectively, we don't agree with the changes as we believe it's not the system which is not working effectively but rather the organisation is lacking good leadership. The values which the NHS has, acts as guiding principles for individuals and organisation. We believe one of the main reasons why so many people join NHS is because of its strong values, and if the government doesn't follow these principals of the NHS and makes changes to them then the trust is broken. ...read more.

Kanter et al argues that change is only successful when the entire organisation participates in its effort. One current example of the change which the government is introducing is the job evaluation scheme. Under the new system, basic pay will be determined on the basis of job weight. Job weight will be assessed using a new NHS job evaluation scheme. According to the government, the agreement is founded on the need to ensure a fairer system of pay for NHS staff that will support modernised working and help deliver modernisation. The reason why we are against this is because this involves grading the staff, each individuals roles are scored and then mapped into one of the eight pay bands, which will then determine their pay. When people are involved in grading, if they are not graded in a way where the individual agrees with the grading, it can cause low self esteem. Individuals feel useless. If the change mechanisms are not beneficial to the NHS staff they may decide to leave, which means there will be even more shortages of NHS workers. ...read more.

Countless change programmes have failed despite well argued logic, rationale, and technical argument because people in positions of legitimate power and authority wavered in their support. According to Garside, P, most people working in NHS do not wish to change their location, style, or mode of working. They not only do not embrace and engage with the plans for change, they actively resist. The culture of the organisation, its norms, values, behaviours and policies as perceived by staff, must change for change to occur, which we don't believe the government can manage to do. We believe everybody is emotionally attached to the NHS and any attempt to change it will have fatal consequences. Finally we oppose change because when people can no longer deal successfully with the amount of changes, they begin to display dysfunctional behaviour (Conner, D, 1998). REFRENCES Benton, D. (2003), Agenda for Change: job evaluation. Nursing Standard. 17.36, 39 - 42 Conner, DR. (1998), MANAGING AT THE SPEED OF CHANGE. West Sussex. John Wiley & Sons Garside, P. (1998), Organisational context for quality: lessons from the fields of organisational development and change management London. Kanter, RM. (1992) THE CHALLENGE OF ORGANISATIONAL CHANGE London. The Free Press. Plant, R. (1987), Managing Change and Making It Stick. London. Fontana www.gmb.org.uk/docs/departments.asp www.acas.org.uk/publications/B01.html www.the-change-works.com SHAHIDAKBAR 1 BRIAN WEBSTER ...read more.