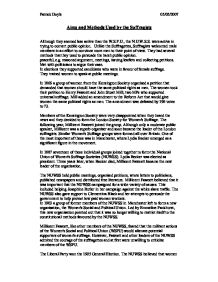 Aims and Methods Used by the Suffragists

Aims and Methods Used by the Suffragists Although they seemed less active than the W.S.P.U., the N.U.W.S.S. were active in trying to convert public opinion. Unlike the Suffragettes, Suffragists welcomed male members in an effort to convince more men to their point of view. They had several methods that they used to persuade the harsh public opinion. peaceful, e.g. reasoned argument, meetings, issuing leaflets and collecting petitions. Met with politicians to argue their case. In elections they supported candidates who were in favour of female suffrage. They trained women to speak at public meetings. In 1866 a group of women from the Kensington Society organised a petition that demanded that women should have the same political rights as men. The women took their petition to Henry Fawcett and John Stuart Mill, two MPs who supported universal suffrage. ...read more.

Millicent Fawcett believed that it was important that the NUWSS campaigned for a wide variety of causes. This included helping Josephine Butler in her campaign against the white slave traffic. The NUWSS also gave support to Clementina Black and her attempts to persuade the government to help protect low paid women workers. In 1903 a group of former members of the NUWSS in Manchester left to form a new organisation, the Women's Social and Political Union. Led by Emmeline Pankhurst, this new organisation pointed out that it was no longer willing to restrict itself to the constitutional methods favoured by the NUWSS. Millicent Fawcett, like other members of the NUWSS, feared that the militant actions of the Women's Social and Political Union (WSPU) would alienate potential supporters of women's suffrage. However, Fawcett and other leaders of the NUWSS admired the courage of the suffragettes and at first were unwilling to criticize members of the WSPU. ...read more.

Although the NUWSS supported the war effort, it did not follow the WSPU strategy of becoming involved in persuading young men to join the armed forces. On the resignation of Millicent Fawcett in 1919, Rathbone became president of the NUWSS. Later that year she persuaded the organization to accept a six point reform programme. (1) Equal pay for equal work, involving an open field for women in industry and the professions. (2) An equal standard of sex morals as between men and women, involving a reform of the existing divorce law which condoned adultery by the husband, as well as reform of the laws dealing with solicitation and prostitution. (3) The introduction of legislation to provide pensions for civilian widows with dependent children. (4) The equalization of the franchise and the return to Parliament of women candidates pledged to the equality programme. (5) The legal recognition of mothers as equal guardians with fathers of their children. (6) The opening of the legal profession and the magistracy to women. Patrick Doyle 05/05/2007 ...read more.