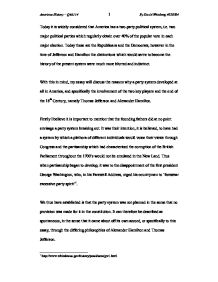 America has a two-party political system.

Today it is widely considered that America has a two-party political system, i.e. two major political parties which regularly obtain over 40% of the popular vote in each major election. Today these are the Republicans and the Democrats, however in the time of Jefferson and Hamilton the distinctions which would serve to become the history of the present system were much more blurred and indistinct. With this in mind, my essay will discuss the reasons why a party system developed at all in America, and specifically the involvement of the two key players and the end of the 18th Century, namely Thomas Jefferson and Alexander Hamilton. Firstly I believe it is important to mention that the founding fathers did at no point envisage a party system breaking out. It was their intention, it is believed, to have had a system by which a plethora of different individuals would voice their views through Congress and the partisanship which had characterised the corruption of the British Parliament throughout the 1700's would not be emulated in the New Land. Thus when partisanship began to develop, it was to the disappointment of the first president George Washington, who, in his Farewell Address, urged his countrymen to 'forswear excessive party spirit'1. ...read more.

This caused major controversy as at this time manufacturing was an infant industry and many Congressmen could not see the benefit of attempting to invest this industry. Hamilton claimed that it was to make the America less dependant on imports, especially from Britain, of tertiary goods12. Jefferson and Madison however saw Jefferson's other aims; to take Federal money away from agriculture and from the pockets of their main support base, and to transfer it to the pockets of the already wealthy; Hamilton's support base. It was not until further into the same year, (1791), that general ideological opposition turned into rebellion. Whisky was an important part of the western states economy and when a tax was levied on Whisky, dissatisfaction swept the states in which republicanism was growing in popularity. Hamilton claimed the tax was to cut down the excessive drinking of the Western Americas, but Jefferson saw it as a more sinister tax, specifically targeting his supporters13. More people now started to support Jefferson in protest to the government, and the movement became more organised, and thus it is this piece of legislation, which I believe was the spark to the blue paper of unrest that had been growing throughout the Americas towards Federal Government. Unrest turned to rebellion and what is significant I believe, in contradiction to Professor Norton*, is that the true importance was ...read more.