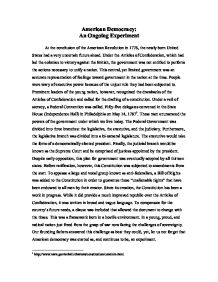 American Democracy: An Ongoing Experiment At the conclusion of the American Revolution in 1776, the newly born United States had a very uncertain future ahead. Under the Articles of Confederation, which had led the colonies to victory against the British, the government was not entitled to perform the actions necessary to unify a nation. This central, yet limited government was an accurate representation of feelings toward government in the nation at the time. People were wary of executive power because of the unjust rule they had been subjected to. Prominent leaders of the young nation, however, recognized the drawbacks of the Articles of Confederation and called for the drafting of a constitution. Under a veil of secrecy, a Federal Convention was called. Fifty-five delegates convened in the State House (Independence Hall) in Philadelphia on May 14, 17871. These men enumerated the powers of the government under which we live today. The Federal Government was divided into three branches: the legislative, the executive, and the judiciary. Furthermore, the legislative branch was divided into a bi-cameral legislature. The executive would take the form of a democratically elected president. Finally, the judicial branch would be known as the Supreme Court and be comprised of justices appointed by the president. ...read more.

They jeopardized the social norms instituted by the previous majority. As pluralism became more accepted in the early, twentieth century, Protestants fought not just to preserve the predominance of their religion, many also battled to enforce the moral norms associated with it.3 Though their numbers have grown exponentially in the past century, arguments made by the Christian Right based on the Bible are often dismissed as implausible for social policy. Refusing to resign themselves from a potentially corrupt society, the Christian Right attempts to use the vitality of its membership to bolster political power. This groups sees the pluralism and social liberalism in our society as a direct assault on their way of life. Since the 1970's, this religious minority has attempted to regain its status as the moral majority. It is where religion meets politics that consistency is muddled. While conservatives are quick to site the text to protect the right to bear arms, they do not see the same clarity in the stipulation that the church and state shall remain separate. Voting records suggest that most Republicans favor some form of religious teaching or practice in public schools. These schools receive public funding, however, and are thus considered part of the state. ...read more.

Furthermore, while in some cases the Republican party fights for original intent and to protect the rights of every citizen from the government, where religion is involved they not only vote their conscience, but attempt to force others to live in a way that is acceptable to their beliefs. Rather than commit wholeheartedly to a position that would alienate moderates, concessions are made. What has yet to be determined, however, is if the party is truly a religious group masking its Christian intentions or if they are committed to the rights and freedoms of the citizen yet aim to appeal to a religious audience. In either case, concessions are made that sacrifice ideology for political expediency. A core set of principals has long been out of sight in American politics. In an age where campaigns depend so heavily on finance, parties can little afford to offend potential supporters. Moreover, while some compromises in ideology are made, change is accomplished in smaller steps by moving the opinion of the moderates rather than by sweeping, radical effort. Unfortunately, this speaks poorly of American politics. It suggests that dogma has been defeated by the dollar and that convictions have lost out to convenience. It is apparent that two political parties, with broad, moderate views, cannot satisfy all issues with a consistent set of ideas. ...read more.