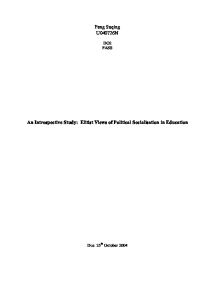 An Introspective Study: Elitist Views of Political Socialisation in Education.

Peng Suqing U040726N DO2 FASS An Introspective Study: Elitist Views of Political Socialisation in Education Due 25th October 2004 I. Introduction "What are your views of the way Political Socialisation is being conducted now in the education system?" In this essay political socialisation in the education system refers to how students are familiarized with local politics through their educational experience. Education here, defined as one's individual exposure to the national syllabus and school environment. This essay is a case study. The objective: to deliberate how ex-students from arguably the best junior college in Singapore view political socialization. Having been brought up in an environment of educational elitism, I contend to see how successful the government has been instilling a sense of nationalistic patriotism amongst the smartest students from particular efforts like National Education and Social Studies. I conducted research by interviewing 3 individuals, who were ex-students of Raffles Junior College. Andrea, Daniel and Nicholas were all previously from the Arts Faculty. Academically bright and among the best in their classes, I carefully chose them for the diverse backgrounds they came from. Andrea- 19, holds a Malaysian citizenship but has grown up in Singapore almost all her life. She wants to change her citizenship but because of "damn bureaucracy" and government regulations, cannot until she turns 21. ...read more.

-1Timothy 2:2 Criticism of the way political socialization was being conducted in schools was given more in an attitude of constructive criticism than malignant flak. Even expressing opinions of perceived shortcomings was done in a forgiving manner. "It's social engineering done for a good purpose" (Nicholas). Andrea was very candid: "We're probably all brainwashed without knowing it. But to me that's alright... So long as we're mostly living happily in our own lives." Over the past few years, multiple revisions have been made to the NE and Social Study syllabus. Social studies has been made compulsory for secondary school students, mini-speakers corners have even been set up. Nonetheless, Andrea feels that "the whole thing is just an artifice. She did relief teaching during her A-level break and was exposed first-hand to the way political socialization was being done in schools. "[T]he stuff they speak about (at Speakers Corner) is all rehearsed. They don't just stand up at the spur of the moment and discuss what they think about current issues in Singapore... it's become something that has to be bound 'cos the teachers know that MOE has said "Oh you need to conduct speaker's corner lessons in your school." She pointed out grimly that if anything, it's "the politically correct thing to do to give the impression that you're open to politics". ...read more.

They realise this change is absolutely necessary because their political continuity depends on economic prosperity. "[W] e are so capable, we are so efficient, we are so comfortable that we stick with what we have tried and tested and found working and we are reluctant to take risks and try new things." - PM Lee But at the same time, they seem hesitant, I feel, because economic stability depends on political stability and this is something you risk in opening up politically. For the few from the 'elite students' I interviewed, it is provocative to realise that they do think and are even critical about the Singaporean governing methodology. Coming from an elite school has if anything distinctive, made them critical but accepting of political governance in Singapore. V. An Afterthought Although I thoroughly enjoyed doing this case-study research essay, it is by no means comprehensive or totally representative. Given the short duration of the assignment, the methodological limitations of this research are obvious. With various restrictions in availability of resource and interviewees (in terms of time and energy), etc., I could not make as in-depth a study of this phenomenon as I would have liked to. As a result, this essay can sadly only be seen as a fresh, perhaps provocative insight to the effectiveness with which the government has been able to instil a sense of nationalistic patriotism among it's brightest youths. ...read more.