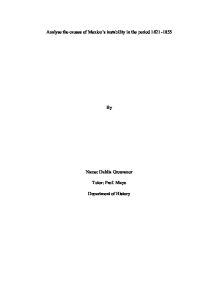 Analyse the causes of Mexico's instability in the period 1821-1855

Analyse the causes of Mexico's instability in the period 1821-1855 By Name: Dahlia Grosvenor Tutor: Prof. Mayo Department of History After independence, Mexico was faced with many challenges and the economy had been ravaged. Many people had died and large numbers of Spaniards had left the country. There were large armies that still had not been demobilized, which would prove to have a tremendous impact on the society. The social dislocations caused by the wars and all its residual wounds had still to be healed. As a result of these things there was great economic, social and political instability for many years after Mexico's independence. It was in this chaotic environment that Mexico tried to forge their new nation. Independence brought differing opinions about what direction the country should take. Whether or not they should maintain a monarchical style of rule, or become a centralist or federalist republic, became the central focus of Mexico's instability after 1821. Throughout this period, instability hinged on a few major factors. The independence wars completely annihilated any form of structure within the society. Firstly, it transferred the power from the royal bureaucracy to the army. ...read more.

To make up government revenue import taxes were levied, sales taxes and new government monopolies were created. But large scale tax fraud occurred in order not to pay the new taxes. Lack of Revenue was not the only problem facing the early Mexican economy. The entire financial structure of the economy was unsound. To make up for the shortfall in government income Mexico sought out loans from England in order to pay the day-to-day expenses of government. The loans were too small to invigorate the economy, but they did lead to a growing dependency of Mexico on European loans. Throughout the period, there were three differing political factions vying for the leadership role, with a different view on at least five major areas. Therefore it should have been expected that political unrest would reach intolerable heights. The five major areas in which these three groups varied pertained to the organisation of the state, methods of social control, state power and economic intervention, Church to state relations and lastly the value of the colonial experience. The conservatives wanted a monarchical structure with a centralised bureaucracy to enforce a hierarchical social structure. They wanted deliberate state regulation and economic intervention to promote wealth and preserve privileges while resisting social mobility. ...read more.

The Liberals proclaimed the Revolution of Ayutla in 1854. The revolution was the first of its kind where ideology and responsible national action would be more important than the personality of the leader. This crucial turning point marked the ending of the age of failed liberal leadership. After approximately three decades of great instability and power hungry governments unwilling to implement positive societal reforms, changes in the attitudes of new radical liberals could be seen. In 1855, Juarez, the minister of justice, produced a law, 'Juarez Law', which abolished clerical immunities by restricting the jurisdiction of ecclesiastical courts to ecclesiastical cases and divesting the army of some of its privileges. The period of 1821 - 1855, is one that is not particularly loaded with a number of clear-cut reasons as to the instability of Mexico throughout this time. Allowing for the variety of literature contributing to this period in Mexico, certain common assumptions and conclusions have been made. In this way, certain core factors, which bear directly on the instability of the period, exist. One must now recognise the degeneration of the economy, the unprecedented power of the army and the church and the rival political factions, as being those core factors that completely destabilized the Mexican society in this phase of their development. ...read more.