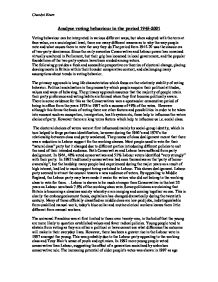 Analyse voting behaviour in the period 1945-2001 Voting behaviour can be interpreted in various different ways, but when adopted with the term at face value, on a sociological level; there are many different reasons as to why the way people vote and what causes them to vote the way they do.The period from 1945-70 was the classic era of two-party dominance. Since the early seventies Conservative and Labour power has remained virtually unaltered in Parliament, but their grip has loosened in local government, and the popular foundations of the two party system have been eroded among voters. The following provides a fresh and accessible perspective on theories of electoral change, placing developments in Britain within their broader comparative context, and challenging many assumptions about trends in voting behavior. The primacy approach is long life characteristics which focus on the relatively stability of voting behavior. Political socialisation is the process by which people acquire their political attitudes, values and ways of behaving. The primacy approach assumes that the majority of people retain their party preference and voting habits are formed when they first become politically aware. ...read more.

There was also the greater longevity which gave women a more of a chance to loose the radical intense feeling of youth. However both suggestions cause no casual link between voting and gender as such. Women usually stayed at home and look after the family as they felt it was their natural position. In 1979 the gap narrowed and then disappeared. Labour appealed to women with issues such as health and education. Thatcher appealed to the "Macho image", whilst Labour appealed to matters such as abortion, health, divorce. They made an effort to convince women voters. There is an influence on the voting behavior which political scientists refer to as the "neighborhood effect". It stated that the more middle-class an area was, then the more conservative were middle class; the more working class an area there was a stronger support for Labour. Hence voters therefore, tend to conform to the locally dominant political norm. Labour is more stronger in urban areas, while Conservatives are more stronger in the rural areas. The reasons for this are quite complex but are related to the different economic structure of the region in terms of social class. ...read more.

A protest vote is a negative vote. It is a negative vote against a policy or against the current direction of the government, rather than a vote fro the opposition parties. Protest voting is more common in by-elections than in general elections. In June 1994 a conservative majority of 17,702 was overthrown in the Eastleigh by-election, it was a clear sign that the voters of Eastleigh wanted to protest about the government's recent behaviour. On reason why the conservatives did so badly in the local elections during 1979-1997 was that people who voted Conservatives in general elections were prepared to register a protest vote against the government in local elections. Within the last 60 years or so voting trends have changed fairly dramatically, Recency issues seem to have more of an impact at elections. Determinants such as age, gender occupation, all these influences and political affiliations seem to have slowly withered away although they still form the basis of voting behaviour. This has made it increasingly difficult to attribute voting behaviour to a single source such as social class. Voters seem to "swing" from part to party in an election, however they provide a vital source of change in democratic politics. Chandni Bhatt ...read more.