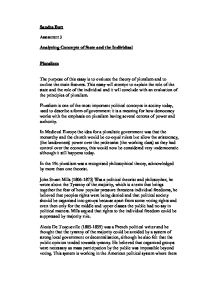 Analysing Concepts of State and the Individual Pluralism.

Sandra Butt Assessment 3 Analysing Concepts of State and the Individual Pluralism The purpose of this essay is to evaluate the theory of pluralism and to outline the main features. This essay will attempt to explain the role of the state and the role of the individual and it will conclude with an evaluation of the principles of pluralism. Pluralism is one of the most important political concepts in society today, used to describe a form of government it is a meaning for how democracy works with the emphasis on pluralism having several centres of power and authority. In Medieval Europe the idea for a pluralistic government was that the monarchy and the church would be co-equal rulers but allow the aristocracy, (the landowners) power over the proletariat (the working class) as they had control over the economy, this would now be considered very undemocratic although it still happens today. In the 19c pluralism was a recognised philosophical theory, acknowledged by more than one theorist. John Stuart Mills (1806-1873) ...read more.

Bentley believed that this emphasises the competitive nature of the political system and argues that competition prevents power being concentrated in the hands of the few so to prevent an oligarchy. Bentleys approach was empirical and pragmatic for it's time, but it is no longer accepted that for every potential group there corresponds an actual group, some groups never come into existence. Karl Marx (1818-1883) would claim that the fundamental structures that make up society never change and power is never distributed to the poorer sections of society. Marxists would argue that the pluralistic state would never work because the working class people would be made to think that they have power but in reality the capitalist elite would hold almost all the power. To Marxists it is obvious that in a capitalist society, businessmen, landowners, military men and the like will always use their wealth to manipulate the political system especially in the USA. The USA has always been a safe haven for people fleeing from their own countries oppressions and class divisions, but they have been disappointed at what they thought would be a truly free and fair society, some found that they were treated like second class citizens and that the streets were not paved with gold. ...read more.

Pluralism is a political philosophy, developed by British liberals and socialists in the early 20thc. Pluralism was developed from the desirability to diffuse sovereign power widely amongst a variety of social institutions, religious, educational and cultural so that state or single class would not dominate society Pluralists saw, small closely-knit groups as the natural form of association and the best defence of natural rights. Individuals should organise themselves into formal groups to bring pressure to bear on the government through strength in numbers. Modern pluralists however recognize that not everyone can or would want to be involved in politics and might prefer a more passive role or rely on others to act on their behalf. In pluralist philosophy the state was to have reduced scope and was to act as a fair and neutral mediator between conflicting interests. Pluralism is thought to have enhanced democracy, because power is equally distributed amongst competing groups and the individuals within those groups can play a part in lobbying government to change laws and policies for the greater good of society. ...read more.