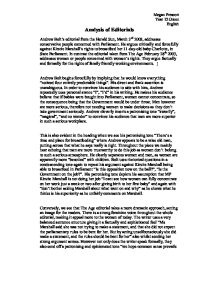 Analysis of Editorials Andrew Bolt's editorial from the Herald Sun, March 3rd 2003, addresses conservative people concerned with Parliament. He argues critically and forcefully against Kirstie Marshall's rights to breastfeed her 11-day-old baby Charlotte, in State Parliament. In contrast the editorial taken from The Age February 28th 2003, addresses women or people concerned with women's rights. They argue factually and formally for the rights of family friendly working environments. ] Andrew Bolt begins forcefully by implying that he would know everything "noticed four entirely predictable things". His direct and frank assertion is unambiguous. In order to convince his audience to side with him, Andrew repeatedly uses personal stance "I", "I'd" in his writing. He makes his audience believe that if babies were bought into Parliament, women cannot concentrate, so the consequence being that the Government would be under threat. ...read more.

Bolt uses rhetorical questions in a condescending tone again to repeat his argument against Kirstie Marshall being able to breastfeed in Parliament "Is this opposition now on the ball?", "Is the Government on the job?". His patronising tone depicts his assumption that MP Kirstie Marshall is not doing her job "I cant see how women can fully concentrate on her work just a week or two after giving birth to her first baby" and again with "don't bother asking Marshall about what went on and why" as he shows what he thinks is his superiority as he unfairly comments on Marshall. Conversely, we see that The Age editorial takes a more dramatic approach, setting an image for the readers. ...read more.

In conclusion, Andrew Bolt uses forceful and critical language to argue that Kirstie Marshall doesn't have the right to breastfeed baby Charlotte in State Parliament. Using rhetorical questions and patronising phrases he is able to depict that women are not suited to Government as it is better suited to the more sophisticated and serious men who do not get besotted with babies. However in stark contrast we see that The Age editorial uses a more sophisticated and formal approach comprising of balanced sentence structures to send a more feminist approach to the topic. We can see that their main argument is to combine a family friendly workplace into everyday life as today it is more common sense as a lot more women are working instead of staying home. Megan Prescott Year 12 Green English ...read more.