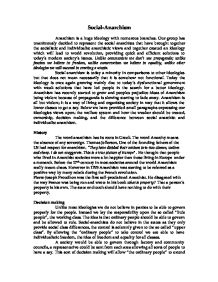 Anarchism is a huge ideology with numerous branches. Our group has unanimously decided to represent the social anarchists that have brought together the socialistic and individualist anarchistic views and together created an ideology which will lead to world revolution, providing quick and efficient solutions to today’s modern society’s issues. Unlike communists we don’t use propaganda; unlike fascism we believe in freedom, unlike conservatism we believe in equality, unlike other ideologies we will succeed in creating a utopia.

Social anarchism is today a minority in comparisons to other ideologies but that does not mean necessarily that it is somehow not functional. Today the ideology is once again growing mainly due to today’s dysfunctional government with weak solutions that have led people in the search for a better ideology. Anarchism has recently started to grow and peoples prejudice ideas of Anarchism being violent because of propaganda is slowing starting to fade away. Anarchism is all but violent; it is a way of living and organising society in way that it allows the lower classes to get a say. Below we have provided small paragraphs expressing our ideologies views upon; the welfare system and how the weaker should be treated, ownership, decision making, and the difference between social anarchist and individualist anarchism.

The word anarchism has its roots in Greek. The word Anarchy means the absence of any sovereign. Thomas Jefferson, One of the founding fathers of the US had respect for anarchism. “They have divided their nations into two classes, wolves and sheep. I do not exaggerate. This is a true picture of Europe". He thought that people who lived in Anarchist societies were a lot happier than those living in Europe under a monarch. Before the 17th century in most societies around the world Anarchism really meant chaos. However in 1793 Anarchism was starting to be referred as a positive way by many rebels during the French revolution.

Pierre-Joseph Proudhon was the first self-proclaimed Anarchist. He disagreed with the way France was being run and wrote in his book what is property? That a person’s property is his own. The state or church should have nothing to do with their property.

Unlike most ideologies we do not believe in parties to be able to govern properly for the people. Instead we lay the responsibility upon the so called “little people”, the working class. The idea is that ordinary people should be able to govern and be allowed to rule. Social-anarchists do not believe in the states as they only provide social class differences, the control is solemnly given to the so called “upper class”. By allowing the “ordinary people” to take control we are able to have individualistic freedom, the idea of freedom and equality for all classes.

A society would be able to govern through factory and community councils, a representative could be sent from each area allowing all sorts of people to have a say. This sort of decision making will allow “the ordinary people” to extend their freedom and living conditions but still from a sort of boundary preventing there freedom for interfering with other peoples freedom because of this multi social classed way of governing.

Social Anarchist believe that there is supposed to be a "council" that will decide what is to be done with people's wealth. So from an anarchist point of view, they don't really believe in the welfare system we have now.

If you take the example of poor people living in, let's say, Africa. In Africa they have vacinations, "but", in that place and time most people don't have enough money to be able to buy them. What should happen then? Should we just abandon them? Thanks to some ideologies that's exactly what's happening, and by having a council that is what they want to change.

"The state is there to protect the interests of this minority, if not by persuasion then by force. Laws are made not to protect us but to protect those who own the property."

Having a council enables democracy but prevents a role of leadership that causes the lower classes to be oppressed. The rich people still keep their money, unlike communism, but there is still some sort of equality because of this.

Social anarchists are against any kind of private ownership. So they are against landlords, big factory owners, companies with monopoly’s etc. This is a good solution to problems we face because this way a rich minority (capitalists) won’t be able to exploit the poorer majority. However Anarchists are not against people owning houses, boats, cars etc. This sort of ownership is known as personal property. The difference between private property (ownership) and personal property is that in private property there are a group of people working together e.g. in a factory you have the owner and the workers whereas personal property means something which is basically your own like your house, car etc.

Another anarchist belief about ownership is that no one from outside should interfere with your property. In some kingdoms or dictatorships the king/dictator etc can take away your land but this is a thing Anarchists are very strongly against. Nobody should be able to interfere with your own personal property.