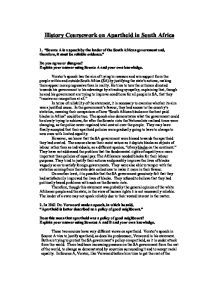 History Coursework on Apartheid in South Africa 1. "Source A is a speech by the leader of the South African government and, therefore, it must be reliable evidence." Do you agree or disagree? Explain your answer using Source A and your own knowledge. Vorster's speech has the aim of trying to reassure and win support from the people within and outside South Africa (SA) by justifying the state's actions, making them appear more progressive than in reality. He tries to turn the criticism directed towards his government to his advantage by attracting sympathy, explaining that, though he and his government are trying to improve conditions for all people in SA, that they "receive no recognition at all." In terms of reliability of the statement, it is necessary to examine whether its aim was a justified cause. In the government's favour, they had access to the country's statistics, meaning their comparison of how "South African blacks are the best paid blacks in Africa" could be true. The speech also demonstrates what the government could be slowly trying to achieve, for after the Soweto riots the Nationalists realised times were changing, as the police never regained total control over the people. They may have finally accepted that their apartheid policies were gradually going to have to change to new ones with limited equality. However, we know that the SA government were biased towards the apartheid they had created. ...read more.

He uses words of contrast to distinguish the change between what Soweto was and had been. Illegal is the key word because it shows he has no sympathy for those who are breaking the law. R. W. Johnson, a writer of many books about the history of SA, wrote Source D. His argument was very scathing of the SA government's supposed concern for its black people, stating that the lack of improvements to Soweto showed negligence of the peoples' health and welfare, 'There is one hospital for what is one of the largest cities in Africa...the majority of children suffer from malnutrition.' This extract suggests the extent of poverty in a way that appeals to the audience by promoting children's deprivation and using emotive words. Both quotes are in the form of factual information, which means that they are more believable to the reader. However, without investigating further into the extracts it is impossible to come to a firm conclusion about the state of Soweto at that time. The two articles do not contradict each other, but make selective use of statistics to give particular impressions. 4. Sources E and F give different accounts of the riots in Soweto in 1976. Which of these two accounts is more likely to be correct? Explain your answer using Sources E and F and your own knowledge. ...read more.

Blacks were also not able to work where they wanted to, controlled by passes, and many were forced to leave their families to work in mines or factories. Restricted curriculum for black school children was a major factor. Since apartheid began it had seemed that the white government intended black education to do nothing more than prepare them to be servants or unskilled workers. Even though they were provided with poorly qualified teachers, in decrepit buildings and large classes, they were still expected to pay for this inferior education. The trigger was when the state instructed half of black lessons to be in Afrikaans, the language of their oppressors. In addition to the education issues, the rising black unemployment and the abolishment of urban local authorities and replacement with local boards together combined to cause pupils to protest. The extract states that "the Soweto riots of 1976 were the result of an overreaction by the SA police" whereas in fact only the tragic killing of children that was due to the overreacting and panicking of the police in charge. There were fundamental reasons for the riots, which culminated to form the outrage shown in the Soweto riots. Source E disagrees with this, but I think that the police themselves played no main part in the initial causing of the riots. The obstruction and killing of innocent children did cause newfound outrage, meaning the spreading of the Soweto riots to other parts of SA and the unbelieving indignation of people in other countries. ...read more.