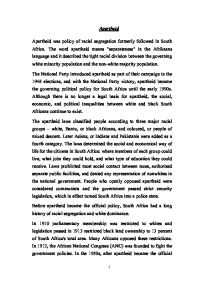 Apartheid Apartheid was policy of racial segregation formerly followed in South Africa. The word apartheid means "separateness" in the Afrikaans language and it described the tight racial division between the governing white minority population and the non-white majority population. The National Party introduced apartheid as part of their campaign in the 1948 elections, and with the National Party victory, apartheid became the governing political policy for South Africa until the early 1990s. Although there is no longer a legal basis for apartheid, the social, economic, and political inequalities between white and black South Africans continue to exist. The apartheid laws classified people according to three major racial groups - white, Bantu, or black Africans, and coloured, or people of mixed descent. Later Asians, or Indians and Pakistanis were added as a fourth category. The laws determined the social and economical way of life for the citizens in South Africa: where members of each group could live, what jobs they could hold, and what type of education they could receive. Laws prohibited most social contact between races, authorised separate public facilities, and denied any representation of nonwhites in the national government. People who openly opposed apartheid were considered communists and the government passed strict security legislation, which in effect turned South Africa into a police state. Before apartheid became the official policy, South Africa had a long history of racial segregation and white dominance. In 1910 parliamentary membership was restricted to whites and legislation passed in 1913 restricted black land ownership to 13 percent of South Africa's total area. Many Africans opposed these restrictions. In 1912, the African National Congress (ANC) was founded to fight the government policies. In the 1950s, after apartheid became the official policy, the ANC declared "South Africa belongs to all who live in it, black and white," and worked to abolish apartheid. After anti-apartheid riots in Sharpeville in March 1960, the government banned all black African political organisations, including the ANC. ...read more.

All of the other policemen were unharmed. Tyler confirms that the crowd assumed the police were firing blanks, which is why they did not run sooner or take the police seriously when they opened fire. This shows why it is likely that most of the crowd were shot in the back (Source F) because they were running away, but all too late to save themselves. In conclusion, this shows source F to be reliable, because not only is it realistic but also it is backed up by a personal account from an eyewitness. 4. Source E is another extract from Tyler's account. Because it describes the sequence of events literally, as he was there, it gives a crystal-clear impression of lots of aspects of the events at Sharpeville. For example, Tyler talks about how some of the women who 'rushed past' him were laughing. This is a blatant indicator and evidence of how gentle the crowd was: that they did not take the police's gunshots seriously. They were oblivious to the seriousness, depth and fatality of the situation. It is also evident of the desperation of those trying to escape when Tyler refers to a young boy who was trying to shield himself from the bullets with an old black coat. This shows that no retaliation occurred, that the crowd ran away in effort to save themselves. Source G helps you to visualise the situation in your mind as it photographically illustrates the scene, but it does not give you the sufficient type of detail in information and statistics that you need to pass fair judgement on the situation. It can only really suggest the atmosphere and makes clear the fear of the police; and show what words cannot. For example, it shows the crowd fleeing, but not the enemy from whom they are fleeing i.e. it cannot tell you about a policeman who looked as if he was 'firing his gun into the crowd' or how many died or were injured and you cannot really see the expressions on the faces of the protesters. ...read more.

Perhaps the Sharpeville Massacre helped us in the sense that it showed the horror of racism and mass killings and brought more light on the subject. People disagree because who are they to believe? The government who could: a) Be absolutely right: the crowd were violent and shooting them dead was the only way of controlling them, b) Be lying so as to protect their reputation and excuse the police. Or, the victims of the shootings and others who believe it was a massacre who could: c) Be absolutely right: the police unnecessarily killed innocent men, women and children peacefully protesting (as shown in photographs), d) Be making it up so as to publicise how bad apartheid and the government were so they could change they way of life for oppressed black South Africans. There is more of a forceful persuasiveness coming from the people who believe it was the fault of the crowds and a more instinctive persuasiveness coming from the people who believe it to have been a massacre as nowadays, racism or prejudice of any sort is illegal and less people are being brought up in racist or prejudiced families. Apartheid had legally been around since 1948 so people were almost used to segregation by 1960 and were tired of it, which was why the protest began in the first place. Because the barrier between black and white South Africans was so great, the Sharpeville Massacre automatically looked like a massacre anyway because most saw it as an example of the police's attitude to any opposing their rules and their authority. As prejudice and racism are such big issues now, it is constantly being debated as our society is a democracy and everybody gets a say, and also, more evidence crops up supporting one side or the other. Some people lean more to the victims' side, some to the police's side and each individual can make up their own mind about whether or not it was a massacre or a justified shooting in 'self-defence'. 15 1 ...read more.