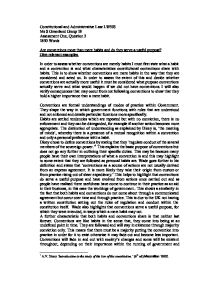 Are conventions more than mere habits and do they serve a useful purpose?

Constitutional and Administrative Law LW503 Ms S Greenland Group 18 Assessment One, Question 2 1850 Words Are conventions more than mere habits and do they serve a useful purpose? Give relevant examples. In order to assess whether conventions are merely habits I must first state what a habit and a convention is and what characteristics constitutional conventions share with habits. This is to show whether conventions are mere habits in the way that they are considered and acted on. In order to assess the extent of this and decide whether conventions are actually more useful it must be considered what purpose conventions actually serve and what would happen if we did not have conventions. I will also verify consequences that may occur from not following conventions to show that they hold a higher importance than a mere habit. Conventions are formal understandings of modes of practice within Government. They shape the way in which government functions, with rules that are understood and not enforced and details particular functions more specifically. Habits are settled tendencies which are repeated but with no conviction, there is no enforcement and they can be disregarded, for example if another action becomes more appropriate. The distinction of understanding as explained by Dicey is, 'the meeting of minds', whereby there is a presence of a mutual recognition within a convention and only a personal preference with a habit. Dicey chose to define conventions by stating that they 'regulate conduct of the several members of the sovereign power.'1 This explains the basic purpose of conventions but does not go any further in outlining their specific duties. ...read more.

The idea of conventions is a paradox. Some conventions, despite their non legal nature, can be more important than some laws,2 and therefore more important than a meagre habit. This is because they underpin the workings of the responsible government. For example the convention that if a majority party loses an election, that government should resign, holds no legal obligation. However, if this were not to be followed it would cause great disorder and unfairness within the government relating to democracy. This shows how conventions are more than mere habits as they involve detaining order and the rule of law. As the examples show conventions guide the government in their actual functions and are very useful in keeping order within government itself and creating a wide knowledge of how matters should be properly conducted. Although they serve a useful purpose they cannot be legally enforced. They cannot be enforced as statutes are, but there have been times when conventions have been given legal status. From the time of the English Civil War when Parliament clashed with king over finance, it was accepted that money bills/acts came from the House of Commons. This was given legal status in 1911 by the Parliament Act which stated that parliamentary finance bills/acts must originate from the House of Commons.3 The idea that conventions hold no legal power can also be viewed as a benefit and create a usefulness for them. It may be interpreted that conventions have an ability to be flexible unlike laws but more consistent than a habit, making them more useful. ...read more.

In conclusion there are many factors which prove that conventions are more useful than mere habits. The purpose they serve aids not having a written constitution and keeping order within the workings of the government. The fact that they are considered important by those using them within the constitution suggests that they will be used consistently. This is important as they need a majority conviction in order to work. Most importantly conventions are more than mere habits as they stand for important issues within the working of the government and the structure of the constitution which need to exist although not in law. They allow flexibility within the control and give room for evolution within the workings of the government as a whole. Conventions stand for what is too wide a set of practices and understandings to be codified into one single code. There is nothing to say that these set rules wouldn't then be modified by new, updating informal practices, rules and principles. There is indeed a distinct borderline between contact that is habitual in practice, and conventional conduct that occurs as a result of what is felt to be constitutional obligation. 1 A.V. Dicey 'Introduction to the study of the law of the constitution.' (6th ed) Macmillan 1902. 2 Marshall, G 'What are constitutional conventions' 1984 pp33-39 3 www.Parliament.uk 'Parliament Acts 1911 and 1949' 4 Allen and Thompson 'Cases and Materials on Constitutional and Administrative law' (7th ed) Oxford Press 2003 pg 260 5 Philippe Norton 'Sent to the Wolves' The Times Law Supplement August 2004 ...read more.