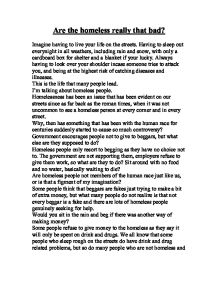 Are the homeless really that bad?

Are the homeless really that bad? Imagine having to live your life on the streets. Having to sleep out everynight in all weathers, including rain and snow, with only a cardboard box for shelter and a blanket if your lucky. Always having to look over your shoulder incase someone tries to attack you, and being at the highest risk of catching diseases and illnesses. This is the life that many people lead. I'm talking about homeless people. Homelessness has been an issue that has been evident on our streets since as far back as the roman times, when it was not uncommon to see a homeless person at every corner and in every street. ...read more.

Some people think that beggars are fakes just trying to make a bit of extra money, but what many people do not realize is that not every beggar is a fake and there are lots of homeless people genuinely seeking for help. Would you sit in the rain and beg if there was another way of making money? Some people refuse to give money to the homeless as they say it will only be spent on drink and drugs. We all know that some people who sleep rough on the streets do have drink and drug related problems, but so do many people who are not homeless and surely this is even more reason to help them so that they can become clean off the drugs and live a decent life? ...read more.

Seeing as there are so many, it confuses me why the government are not doing anything about it, as they are the people complaining that homeless people and beggars are driving tourists away from London and its heritage. I do not understand that if they feel so strongly about this, why are they not doing anything to deal with it? Surely they could build more accommodation specifically for homeless people, which would solve all the problems. Homeless people would be off the streets and in a safe warm environment, and the government's worries that tourists are being driven away by harassing beggars and the homeless and the amount of money the government are loosing through it would no longer exist. What do you think? Are the homeless really money grabbing scoundrels or are they simply genuine people seeking for help to try to build their lives back up again? ...read more.