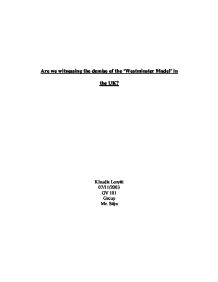 Are we witnessing the demise of the 'WestminsterModel' in the UK?

Are we witnessing the demise of the 'Westminster Model' in the UK? Klaudia Loretti 07/11/2003 GV 101 Group Mr. Stijn The 'Westminster model,' so-called after the area where the Houses of Parliament stand, is used to describe the form of representative democracy present in the United Kingdom. It is often referred to as the majoritarian model due to the fact that it is characterized by a rule of the majority. British politics was only in tight conformity with the traditional, Westminster model from 1945 to 1970, thus for twenty-five years. From 1918, when the admission of women to suffrage initiated the beginning of a fully democratic system, until 1945 and then again in the period since 1970, there have been very significant deviations from the majoritarian model.1 Almost all of its main characteristics are not valid today. We are witnessing a demise of the Westminster model as one party and bare majority cabinets disappear, the fusion of power and cabinet power crumbles, the two party system is threatened, the one-dimensional party system falls with voting behaviour changes, devolution divides the IK, as the state is decentralised and multi-level governance arises, the European Union limits the UK's sovereignty, proportional representation initiates, referendums are brought forth, the House of Lords is reformed, the constitution is rewritten, and as the Labour and Conservative parties become closer. The first aspect that presents the demise of the majoritarian model is the fact that one-party and bare majority cabinets were very rare in the recent past. ...read more.

Appearing cleavages and the downfall of the one-dimensional party system is also relevant to this topic. In the old model, the principal political difference that divided the British and their parties was disagreement about socioeconomic policies. The labour party represented the left-of the-centre and was supported by working class voters. The Conservative was right-of-the-center and was supported by the middle-class. British society used to be highly homogenous and the above issues were the only dimension that caused Parties to diverge.8 Yet now, the UK has become a "multi-national state." The social class is no longer the only dimension of differentiation. Ethinicity and religion have become important determinants of voting behaviour also.9 This leads us on to the notion of multi-level governance, which proves to undermine the traditional governmental model. The British political system was previously characterized as unitary, with a strong central base. At the present time, "the structure of the government is fragmented into a maze of institutions and organizations." The model in particular fails to capture the complex reality of the British system. There is not only one centre of power. In practice, there are many centers and diverse links between many agencies of government at local, regional, national levels and also links with the EU. There is a very complicated architecture to systems of government. 10 'Devolution' is also key when discussing the demise of the system. ...read more.

Today, only 12 law lords and peers who have held high judicial office undertake exercise specialist tasks in this branch of Parliament.18 Thus, the House of Lords' power has been significantly curbed and its influence in politics decreased. The fact that Labour and the Conservatives have set aside their distinctive ideologies also undermines the traditional Westminster model. The transformation of the Labour into the New Labour Party marked the beginning of a drawing together, thus towards the centre, of the policies of the two distinct parties. New Labour altered Clause Four and rejected old left-wing socialism and 'labourism,' and began to appeal more to the middle class. 19 The demise of the Westminster model is also being witnessed in the area of constitutional reform programme that the Labour party wants to carry out. Among the key issues on the reform agenda are such as the change voting system, radical freedom of information, or the emergence of the second chamber of the House of Lords. If the constitutional reform programme delivers change in each of these sphere, the old Westminster model will be transformed.20 Most people still use the old term 'Westminster model' in order to describe the form of government present in the United Kingdom. Yet we see that as time passes by, politics also go through radical changes and transformations and with it, terms also have to be altered. All elements of the old political model of the UK have been challenged and the system is rapidly breaking down. ...read more.