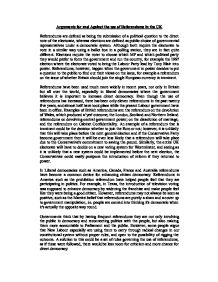 Arguments for and Against the use of Referendums in the UK

Arguments for and Against the use of Referendums in the UK Referendums are defined as being the submission of a political question to the direct vote of the electorate, whereas elections are defined as public choice of governmental representatives under a democratic system. Although both require the electorate to vote in a similar way using a ballot box in a polling station, they are in fact quite different. Elections require the voter to choose which MP and which political party they would prefer to form the government and run the country, for example the 1997 election where the electorate voted to bring the Labour Party lead by Tony Blair into power. Referendums, however, happen when the government in power decides to put a question to the public to find out their views on the issue, for example a referendum on the issue of whether Britain should join the single European currency is imminent. Referendums have been used much more widely in recent years, not only in Britain but all over the world, especially in liberal democracies where the government believes it is important to increase direct democracy. Even though the use of referendums has increased, there has been only eleven referendums in the past twenty five years, and almost half have took place while the present Labour government have been in office. ...read more.

Another disadvantage of referendum that falls into the unfairness category could be the accusation that governments use referendums to side-step parliamentary protocol i.e. stepping past Parliament by side-stepping its conventions and putting power directly in the hands of the electorate. An ex Conservative MP Jonathon Sayeed said 'Referendums are not a substitute for parliamentary democracy and must only be used sparingly'. Many people have accused the present Labour Government of abusing this convention and having four referendums in their first year of office. To overcome these criticisms of referendums, they should be governed by legislation. As the use of referendums has become much more common recently, both in Britain and many other places around the world, we have no rules governing their use. At present, the government decides when and on what issues they will be held so they become another political tool for the party in power. If a set of rules was passed, it may limit the government on their use of referendums, but it would make them a formal part of the political process, and would draw the attention back to the real reason of using them in the first place; to enhance fair direct democracy. ...read more.