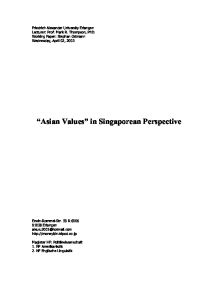 Friedrich Alexander University Erlangen Lecturer: Prof. Mark R. Thompson, PhD. Working Paper: Stephan Ortmann Wednesday, April 02, 2003 "Asian Values" in Singaporean Perspective Erwin-Rommel-Str. 59 R 6006 91058 Erlangen aisuru2001@hotmail.com http://moneybin.tripod.co.jp Magister HF: Politikwissenschaft 1. NF Amerikanistik 2. NF Englische Linguistik Table of Contents 1. Introduction 2 2. The Definition of "Asian Values" 4 3. The Creation of a Singaporean Identity 8 3. The "Negative" Side of "Asian Values" 11 5. "Asian Values" and the Need for Legitimacy 13 6. Conclusion 19 7. Bibliography: 21 1. Introduction Singapore is one of the so-called Tiger States, or economic miracles of Asia, a small city-state that has been able to modernize in little more than half a century. While other nations in the neighborhood struggled economically, Singapore adopted an economic plan of austerity, liberalism, and trade that made it especially interesting in the eyes of Western companies who saw in Singapore the window to a large Asian market. This economic miracle occurred, as nearly every analyst has noted, because of the management of the ruling party, the People's Action Party (PAP), which has governed the country since 1965 without interruption. In the course of the PAP's leadership the democracy in Singapore was restricted in an effort to maintain its power. Thus today Singapore can no longer be considered a liberal democracy and many have labeled it an authoritarian dictatorship with one ruling party. The long time leader, Lee Kuan Yew, would not deny this description as he considers liberal democracy as is practiced mostly in the West as something that is contrary to Asian culture and he often argues that the West and particularly the US is trying to force Singapore to accept the West's ideas. To support his thesis he points to the problems of Western society such as the high divorce rates and high numbers of crimes. He also outlines the shortcomings of other democracies in Asia, including South Korea, Japan, and Taiwan. ...read more.

The most obvious uniting factor in Singapore is, however, not the idea of family or any other aspect of Asian culture or even "Asian values" but the fact that every Singaporean has to speak English. While trying to remain multi-cultural, thus rejecting the idea of the melting pot, Singapore has tried to use the common language as a building block of a common Singapore. But the fact that there can still be seen discontent among the youth of Singapore seems to indicate that the different ethnic groups still are not fully integrated. Despite the harsh criticism, the Singaporean government has increasingly emphasized Chinese or Confucian values as the shared values of Singapore. The media has followed in the government's footsteps as an example from Singapore's Channel News Asia shows. On January 18, 2003 they first showed an episode of CBS's 48 Hours, which focused on the trial of a father who was accused of killing his newborn son. In the course of the trial the father's attorneys pointed to the possibility that the 4-year-old brother was responsible for the infant's death. This broadcast showed how dysfunctional some families in the US are. The interesting aspect was that the broadcast actually came from an American source. Following this program, Channel News Asia featured a peaceful village in the Chinese hinterland. There, so was the message, family values were still intact. This move toward a promotion of Chinese values has, however, not (yet) led to any considerable discontent among the Malays or Indians. According to the study conducted by Ooi et.al. the sense of commitment to the nation has risen the most among Indians and Malays, 50% and 44% respectively. This rate is considerably higher than that of the Chinese where only 39% feel they have become more committed than 5 years ago. 3. The "Negative" Side of "Asian Values" "A command of mathematics, physics, and chemistry is not worth as much as having a good father [i.e. ...read more.

In this regard the discussion over Shared Values has to be seen as an attempt to find a common basis for the Singaporean nation. Nevertheless it is only too convenient for Lee Kuan Yew to argue that liberal democracy stands in opposition to Asian culture. Despite the fact that the history and customs are not necessarily the most receptive for democracy, a number of still traditional Confucian states have become democracies, such as South Korea and Taiwan. The discussion in this paper over the negative side of "Asian values" has shown that certain measures were introduced to restrict negative influences of one or another cultural background. The attempt to contain guanxi, no matter how successful, has to be seen as one attempt to contain the perceived negative influence of this practice on the modern society of Singapore. Moreover the perceived negative influences of other cultures in Singapore were also part on the administration's agenda, for example the emphasis on education, which is more important to ethnic Chinese than to Malays. The final argument in this paper concerned the legitimacy of the Singapore government. According to the data of various studies in Singapore, we can assume the government enjoys great legitimacy among the people. The question in this context was, however, to what extent "Asian values" played and are still playing a role. As a concept of some over-arching general principle Asian values were intended to create a Singaporean identity, which in turn was supposed to increase legitimacy. After the economic crisis in the 1990s, however, the government largely abandoned "Asian values" and retreated to a narrower concept of "Confucian values." This threatened the racial harmony in Singapore to a certain extent but according to recent research has not raised racial tensions. However, the government has found its own justification for maintaining an authoritarian style of government: the gentleman-ruler who espouses ren, humaneness. With this ideological foundation the government hopes to maintain in power and as long as this tiny island nation can remain as economically successful as today the legitimacy of the government is not threatened in the foreseeable future. 7. ...read more.