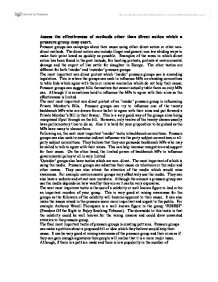 Assess the effectiveness of methods other than direct action which a pressure group may exert.

Assess the effectiveness of methods other than direct action which a pressure group may exert. Pressure groups can campaign about their cause using either direct action or other non-direct methods. The direct action can include illegal and general non law abiding ways to make their point heard as quickly as possible. Examples of the areas in which direct action has been found in the past include, fox hunting protests, protests at environmental damage and the export of live cattle for slaughter in Europe. The other tactics are different for both 'insider' and 'outsider' pressure groups The most important non direct protest which 'insider' pressure groups use is amending legislation. This is where the groups can seek to influence MPs on standing committees to table bids which agree with them or remove anomalies which do not help their cause. ...read more.

Following on, the next most important 'insider' tactic is backbench committees. Pressure groups can also seek to exercise indirect influence via the party subject committees or all-party subject committees. They believe that they can persuade backbench MPs who may be called to talk to agree with their views. This can help increase recognition and support for their cause. On the other hand, the limited power of backbench MPs to influence governmental policy at all is very limited 'Outsider' groups also have tactics which are non- direct. The most important of which is using the media. Pressure groups can advertise their cause on television or the radio and other means. They can also attract the attention of the media which would raise awareness. ...read more.

The downside to this tactic is that the celebrity could be well known for the wrong reasons and could draw unwanted attention to the pressure group. The final most important tactic of pressure groups is creating petitions. Pressure groups can make a petition about a proposed bill or idea which they believe would help their cause. It can be very good at raising awareness of the pressure group and their aims as if they can gain enough signatures then people will realise that it is a more major issue. Although, if there is a petition made and there is low popularity in the number of signatures it receives then it may make the pressure groups appear weak and ineffective. Overall, on the balance of the points made it seems that even though there are some drawbacks in the non-direct methods they are generally very effective in helping the pressure group to prosper in its' aims. ...read more.